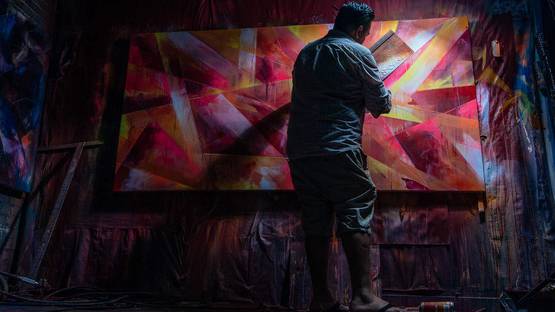 Poesia is a world-renown visual artist from San Francisco Bay Area, born in 1975, who has been doing graffiti for twenty-five years. During his early years as a graffiti writer at the turn of the nineties, he was recognized for his experimental Wildstyle pieces. In the middle of the decade, he became involved with the Transcend Collective. During this period, artist became one of the pioneering practitioners of what became known as Abstract Graffiti, along with Joker, Kofie, and SheOne from the collective.

Whether he is mirroring the work of old masters, composing collages, or creating gestural abstract paintings, Poesia’s work consistently carries the same sense of immediacy as seen in contemporary street art. He wields a hybrid style that is able to bridge the gallery with the street, as well as history with the contemporary.

He is also the founder of the website Graffuturism.com that has led to the Graffuturist group or Graffuturism Movement. The site has become a podium to advocate “progressive graffiti” and unite a geographically disparate community of international artists and their audience. Graffuturism was founded in 2010 and has now exhibited as a group in five major cities around the world including Paris, Los Angeles, London, Glasgow and Miami. With a group consisting of some of today’s top contemporary painters, Graffuturism has established itself as an emerging movement in today’s Art scene. In 2011, at Art Art Basel Miami, Poesia also curated, In Situ, a mural painting collaboration with many artists associated with Graffuturism, such as Kofie, Mare139, Matt W. Moore, Remi/Rough, SheOne and more.

Poesia was featured in Complex Magazine’s 25 most important artists of 2012. He has also been a friend of and regularly involved with the inner circle of 12ozProphet.com since the nineties when he was in three of the only six issues of the printed magazine.