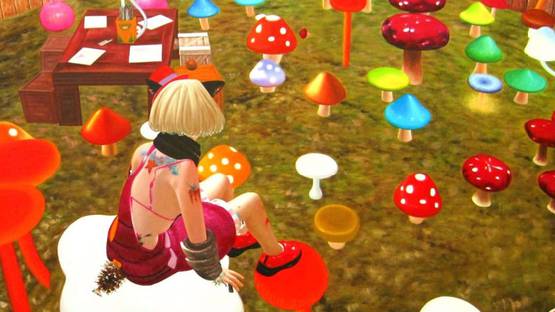 There is a secret hidden behind the bright colors, and it isn’t happiness. The world of manga and video games has heavily influenced the work of Potchi Moopp, a young Japanese artist whose work has managed to blurry the borders between fine art and manga comics. She works mostly in painting and sculpture, and Crazy Mushrooms is a motif present in the both fields. It is inspired undoubtedly by the Super Mario Bros, a video game that has ‘conquered’ the world.

Her style can be described as something close to the American Artist’s Pop Surrealism. She chooses themes close to her generation, such as virtual and fantastic worlds. Potchi Moopp possesses a very precise technical style, influenced simultaneously by the computer graphics and manga comics. In Japan, there is a strong distinction between fine art and comics, but the work of young artists, such as Potchi Moopp, is gaining recognition from both the fans of the comics and from the people who are interested in the fine art. The artist doesn’t think too much while drawing, she gives in to instinct, and the results are astonishing. On the first glance, the pieces look merry and soft, but there is a certain level of aggression that matches the level of frustration that the artist feels.

The artist manages to overcome the strong distinction between comics an fine art, ad incorporate the elements of the both in her art

Bringing the Worlds Together

Potchi Moopp is always represented by her avatar, something that is very virtual world and forum-like. It is no surprise, though, as she belongs to the generation who’s embracing and enjoying in possibilities of the digital. It is truly remarkable for a young artist to be able to connect fine art and comics, two very distant and different worlds. But everything is possible today, so why not cross the lines, mix things up and make them more interesting?

She is represented by Galerie Jacob Paulett in Paris.