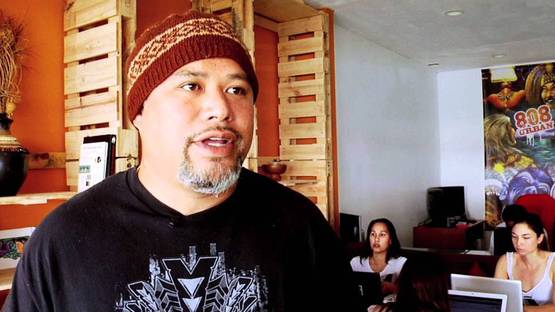 John "Prime" Hina is an American graffiti artist and founder of 808 Urban collective. As a gang tagger he was a prominent force behind the legendary K2S Crew. Coming from Honolulu, Hawaii, Prime spent most of his graffiti days tagging on the streets of Los Angeles and getting into trouble with violence and drugs.

Since the late 1980’s, Prime has become a successful community worker, business and family man. In turning his life around, John has found a highly effective way of steering youth from the dangers inherent in growing up in at-risk neighborhoods, and turning them into community-minded artists and cultural workers. His unique method of youth development is rooted in the art of graffiti muralism, a visual vocabulary of the streets that he has harnessed as a cultural tool for positive social change. John has created over 50 public murals and coordinated numerous public arts events on O’ahu in the past 8 years. These efforts have spearheaded the creation of 808 Urban, a collective of community cultural workers: artists, organizers and volunteers committed to improving the quality of life through arts programming.