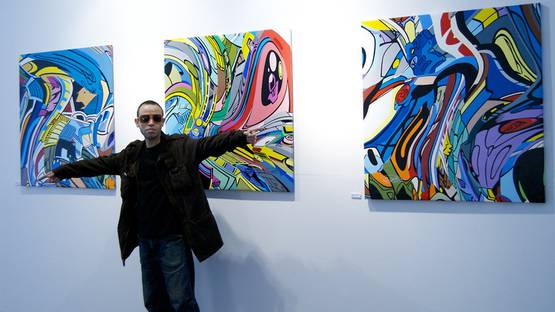 PRO176 was born the 29th of July 1976 in Paris and grew up at Choisy-le Roi, a little town located in Paris south suburb. His parents, works for one in an insurance company, and his mother stays home to raise kids, nothing in the familial background was fated him to embrace an artistic carrier. However, since the age of 5, Pro176 starts the drawing alone, by copy Jack Kirby’s character, the famous American comic-book drawer.

The comic-books from across-Atlantic that his mum used to buy him were clearly his first lectures and will influence him forever. Pro176 kept drawing, by boring a little too, not so many fun in the suburbs, sometimes money is short to join Paris « where everything was happen... », violence in the neighborhood and an unclear future ahead wasn’t a myth. In 1986, the tragic loss of his father, whom he was close will deeply mark his childhood and influence his later work.

By observing one day, the technic of 2 graffiti-artists Mode2 and Colt, back then, they were running the jam « 89 jeunes pourl’égalité » in 1989, the young PRO had the revelation and decide to dedicate his life to painting. In 1991, Pro176 stole his first classic, the Spray Can Art, since then he’s infected, the krylon paint runs through his veins forever.Pro176 wasn’t allowed to sign up into an artistic school because of the lack of his rates in general.

In 1996, Pro176 join the rank of the infamous Grim Team, the French crew teamed by Oeno, Chaze, Turs, or Armen the photographer. Next year he co-founded UltraBoys International, with Gold Jaba, Sozyone, Kool Func 88, Byz, Shake and Kool Recto, they stand out for a new form of graffiti, an aesthetic still influenced by Marvel.

In 2010, Pro176 integrated with RTZ crew (Return to Zero), located in Germany, they are others revolutionary of the futuristic letter in Europe.

The music, rap music mainly, is another major influence of his life, from 1992 to 2010 he’d worked on many projects with different artists, produced 3 albums (Le Cri des Briques, Vocabulaire Granit and Galactick) and toured over 500 dates in France and internationally. Big futuristic machines and other spaceships straight out from a science-fiction movie, which Pro176 watched a lot from his young age, will often appear in the landscape, his letters are worked on to the extreme and always perfectly overlapped in this astral-galactic universe, where the anatomic lines of his characters are combined with a bright colors pallet, like often on his illustrations.

From Pro176 experience, he’ll learn how to handle a paintbrush and how to use acrylic on canvas, his new work will gain a new look due to this technique.