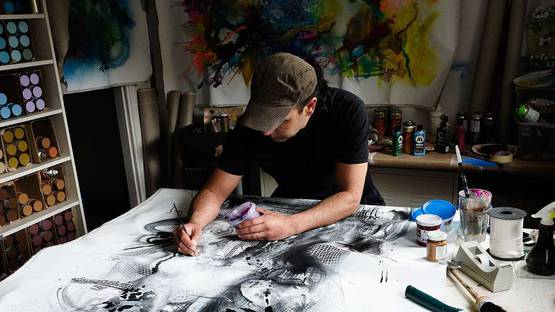 Puppet Industries, Mr. Puppet or just Puppet, is a pioneer of graffiti in Scandinavia. Born as Daniel Blomqvist he has been active since 1984 in the graffiti scene in Stockholm. His beginnings were marked by tagging, under the influences of American wild style and big burner, a mixture of text and graphics. His role models were Seen, Dondi, Futura, but also artists like Jean-Michel Basquiat and Keith Haring. In 1989 he painted the famous Dragon - I'll burn you all graffiti, using colorful graphics and burner style. That wall was a major turning point for him.

The Birth of the Dragon

After the Dragon, he started getting attention from underground Swedish painters. It was included in the Graffiti History Museum in New York. He started traveling more and painting all over Europe. The combination of different style and willingness to stay open to change established him as one of the kings of a Scandinavian street art scene. He will use upside down painted letters, bombing, throw-ups, and wildstyle. He collaborated with some major brands, such as Adidas, Coca-Cola, MTV, and Nike.

Arrival of the Gridman

Puppet never stopped learning, evolving and improving. When he reflected back on his work, he saw a recurring pattern in his style, the same lines repeating, the same sketches appearing. He decided to name this style, to make it personal and came up with the name Gridman. It is the name of an artist, the name for a style, and above all a concept, to which the only Puppet is entitled. He likes clear lines, but also freehand style, where the roughness gives the authenticity. Swirls and twists are coming up together into landscapes of imaginary worlds.

Some of his most famous works are the Blue Lagoon with surgical and deformed letters, and the painting Messtyle 201 which got him to a national exhibition in Stockholm, and work he did with Seen in New York in 1990. He continues to travel a lot, to make both street art, wall paintings but also does commissioned works for galleries, small paintings and designs for various consumer labels. He owns a graphic design company - Puppet Industries, where he continues to work with major clients, but also works for galleries and theaters. He made the decoration for the set of Swan Lake show in Paris in 2013.