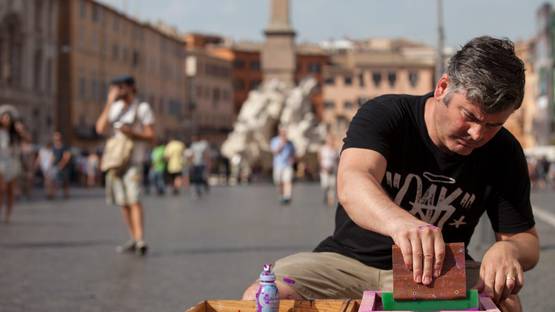 Charles Uzzell-Edwards is a British graffiti artist known by the moniker "Pure Evil" and is a stablemate of Banksy. He is also the son of Welsh painter John Uzzell Edwards.

He was born in South Wales where he grew up in a world of art thanks to his father. The father’s artwork undoubtedly impacted the son, demonstrating a range of influences from cubism to minimalism, from Matisse to Chagall.

To understand a bit about Pure Evil it is illuminating to know that he is a descendant of Sir Thomas More, the Lord Chancellor who wrote the controversial work Utopia and who was later beheaded by King Henry VIII. With this busy background (Sir Thomas was later canonised) it is only natural that Pure Evil should explore the darker side of the wreckage of Utopian dreams and the myth of the Apocalypse, a belief in the life-changing event that brings history with all its conflicts to an end. Pure Evils ancestry is alleged to include eight saints: Vladimir the Great, Saint Anna of Russia, the Holy Martyrs Boris and Gleb, Saint Stephen of Hungary, Saint Margaret of Scotland and Saint Mathilde together with Saint Thomas More, Humbert III of Savoy and several European royal families.He was also a descendant of the Old English Chieftain Ailric, Kings Thane to Edward the Confessor, who held Cawthorne and much of South Yorkshire before the Conquest.

The physical and cultural landscape of the 1990′s U.S. intrigued and beckoned the young Pure Evil–upon completing his studies in graphics and fashion he set off for California’s West Coast. He established himself in San Francisco, working for the Anarchic Adjustment clothing label as a designer. He produced countless t-shirt graphics for screen printing, dropped in on the west coast party scene, and dropped a lot of psychedelics. Pure Evil also became involved in the musical fabric of San Francisco and worked as an electronic recording artist for Peter Namlook’s ambient music label, FAX (based in Frankfurt, Germany).

Pure Evil’s art is heavily inspired by skate culture and graffiti artists from the west coast. As an artist Pure Evil’s enthusiasm for street art grew as he returned to London after a 10 year stay in California. Starting out by painting strange fanged bunny rabbits anywhere and everywhere, is how his passion for urban art led to him picking up a spray can. That tag of a vampire bunny rabbit was bore from the artists feeling of remorse after he shot a rabbit in the countryside as a youth. By developing a true unique style of painting, his simple vision of the dark side aided the creation of his new works. Pure Evil fell in with the people behind Banksy’s Santas Ghetto and started producing dark new prints and artwork. In the past five years he has exhibited worldwide in China, Russia, Mongolia, Brazil, USA, and all over Europe. In 2012 Pure Evil appeared on the BBC TV show The Apprentice, where he took part in an urban art task, this led to a huge increase in interest for his work.

His art has moved off the walls and onto a stunning range of limited edition prints many of which are iconic images he has ‘Evilised’ such as ‘Sgt Peppers Lonely Hearts Bastards’. All these Pure Evil artists prints are available for purchase.

He opened the Pure Evil Gallery in Shoreditch, East London, in 2007 and lives in Hackney.