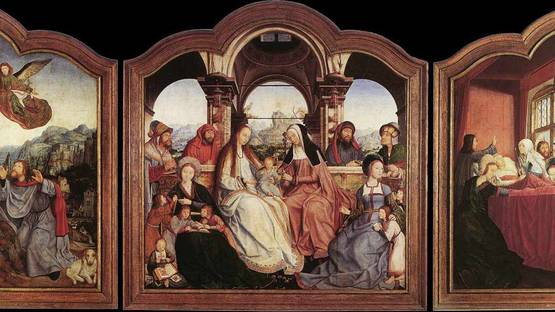 Quentin Matsys was a Flemish painter, a leader of the Antwerp school of Flemish painting. He was born in 1466 in Leuven, Belgium, where he trained to be a blacksmith. There is no historically verified information about his early life since there are no written accounts, however, it is believed that he started decorating prints for carnivals, which led him to paint. He is known for his religious and satirical motifs, hidden under subtle references that were suitable for the time, and specifically well versed in allegorical moral judgment. Matsys used Christian symbols, emblems and conducted it with small details of vanity, egoism, and greed. The accent in his work is on overall atmosphere, on the unseen conversation and the emotional landscape of the characters. Even though there are many references and literal symbols, the attention is centered around melancholic, evil, spoiled faces of the portrayed people. Grimaces and facial expression were quite often the central details of the piece and the emotions they carry dictate the satirical and judging tone of the work. Matsys devoted most of his time to study of human emotion and its expression on various types of characters, from workers to lovers, mothers and children.

Matsys moved to Antwerp when he quit blacksmith practice. Some historical sources say it was due to poor health that he had to leave manual labor. Others say it was one of those events motivated by romantic motives, and that painting was more delicate and interesting, at the same time, felt more heartful to his loving wife. There are no data about his registration in any artistic guild, but his earlier work indicated that he was self-taught. Upon leaving Leuven he started painting more than just festival decoration, and in Antwerp, he was one of the first artist registered at the Guild of Saint Luke. For the durance of his career, he had only four students, apprentices, that were, like him, practicing the Flemish art and trying to revive the style of German Masters and early Italian renaissance paintings. Living in Antwerp, that was at the time becoming the central European trade center with increased money flow and cultural activities heightened, gave him a unique opportunity to witness firsthand the change in the upper-middle class society and the decline in moral and religious values. He is often compared to renaissance painter Dürer, but Matsys did not have the same desire to overdo the details with utmost perfection. His intention was to leave the surface of the canvas unpolished, rough and to step away from the refinement in order to establish himself as a unique individual with deliberately rough technique.

The Usage of References and History Reveals the Information

In an epicenter of commerce, Matsys found inspiration for one of his most famous pieces, The Moneylender and his Wife, painted in 1514. Two persons, a man, and his wife are depicted sitting at a table, positioned in a symmetrical manner, close to each other, signifying their focus on the subjects in front of them, more than each other's company. The man is counting money, jewelry, and gold, while the woman is reading a book, no other than of religious content, the Virgin, and the Child. Matsys was using archaic colors and painting method for the time, and this was the practice for all of his artwork. The devil is in the details, and the devil in this one were the goods on the table. While showing man and woman in opposite polarities, the artist gave a social and cultural analysis of the society at the time. He often used mirrors in his paintings, as other Flemish artists did, in order to establish a connection with space behind the painting and the world outside of the depicted scene. There is a presence of the third figure in the mirror, and two people talking outside of the door. One of them is a young person, symbol of youth, unspoiled mind that still had not encountered the life of sales, trade, and moneymaking. The complexity of the mirror image indicates the wooden crucifix in the window, and the reflection of the third person in the room, a man opposing the main characters, the artist himself.

Personal symbolic languages were used in accordance to the theme, religious or satirical 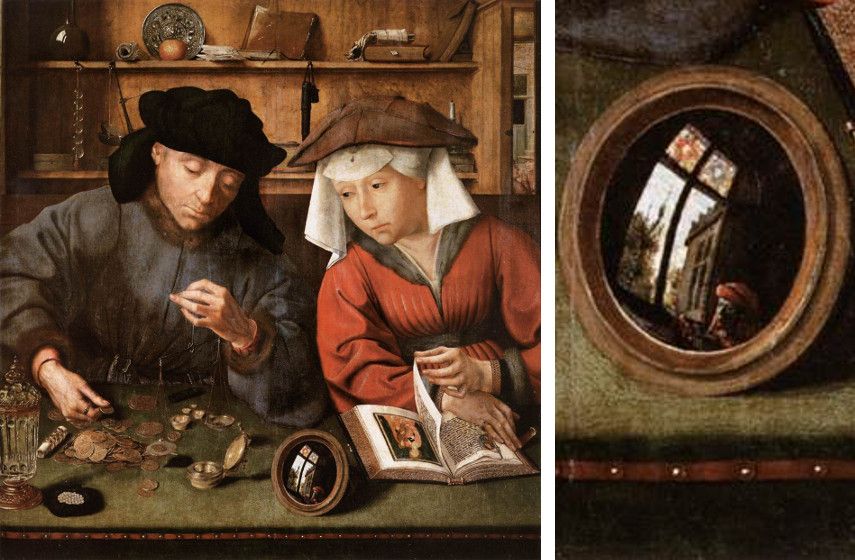 Quentin Matsys - The Moneylender and his Wife, 1514 (Left), Detail of the painting (Right)[/caption]

Religious Paintings and Emblems of Vice

Quentin Matsys revived the existing tradition of implementing small objects of significant meaning in the background of his paintings. In the Moneylender and his Wife, gold and pearls represent lust, a sin that takes away the attention from the religious book. Faith was often substituted with devotion towards sins and vices and greed for wealth. He made sure to include the reminders of a good path that we should follow, the rosary that symbolizes faith, the Virgin that expresses purity and all that is good. Many works of the late 15th and 16th century partially issued the warning that the doom day will come, and the rapture will come and only the pure one will be saved. Matsys had a gift to delicately use these symbols and never to overburden the composition with symbolism. He dedicated more attention to an overall morality of the subject and tried to allegorically place the hints and messages. Religious faith and humble living were part of a religious path, however, people tended to lust for wealthy life and material income. Mortality was a constant subject that Matsys and many of his successors included in their work. Sometimes, the message was obvious, like in his famous painting The Ugly Duchess, 1513. This piece is a satirical work portraying a psychically strange looking woman, aware of her unattractive appearance. The overall image was heightened with unfashionable clothing for the time, and eager facial expression, as she was hoping to find the object of her desire. The flower in her hand symbolizes the marriage proposal, which was nowhere in sight. The overall style in all of the Mastys' work in realism with some tendencies to use grotesque imagery. Her aged skin, out of fashion dress, a headpiece that symbolized the aristocracy, all together ridicule the woman who still tries to seduce the men. Harsh criticism was not intended to her physical looks, the physical appearance was just emphasized to increase the critical judgment of her behavior. It was all part of the genre painting at the time.

Mastys' paintings are full of symbols; the flower in hand symbolizes marriage 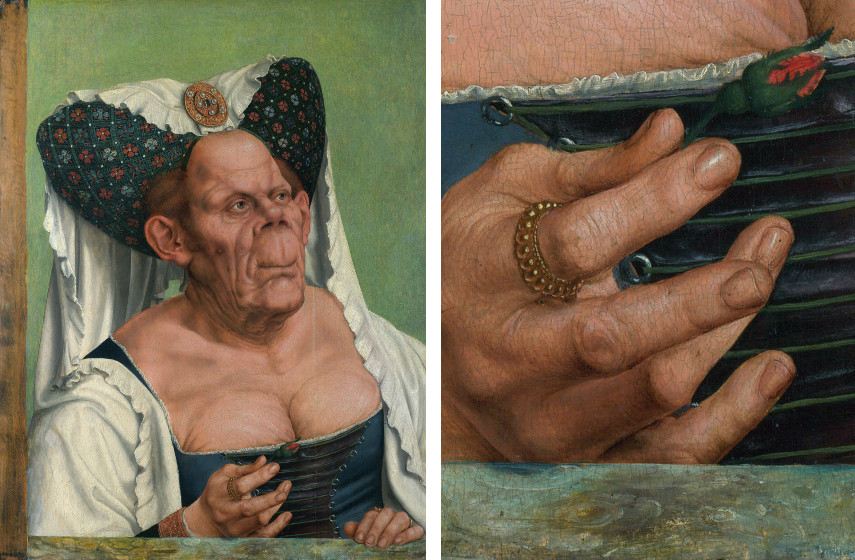 The Ugly Duchess is one of the most popular Matsys' compositions, and it still raises many questions about its origin, the choice of subject, and identity of the woman in focus. It is still debatable if the portrayed woman was a duchess, of noble ancestry if the artist was commissioned to paint the portrait, or he just found her visage curious and interesting. The depiction itself is beautiful, although the subject is not, but her eager facial expression and hopeful eye gaze bring certain warmth and compassion. Art historians found that the woman was probably suffering from the rare disease called Paget's disease, that causes the changes in metabolism so the facial bones become enlarged and deformed. The artist painted her realistic, which means the poor woman truly had to go through life being stigmatized and mocked for her horrible disease. However, her looks were not the part of the criticism, it was her futile hope to find luck and companionship, doing everything possible to attract a suitable man for a romantic endeavor. Matsys chose this subject because it was directly opposing the religious views of humble and respectful living. Masters has an ingenious way of using old techniques and dated (for the time) colors, to make the pictures as realistic as possible, and at the same time to reveal hidden references to social scrutiny and lack of faith among people.