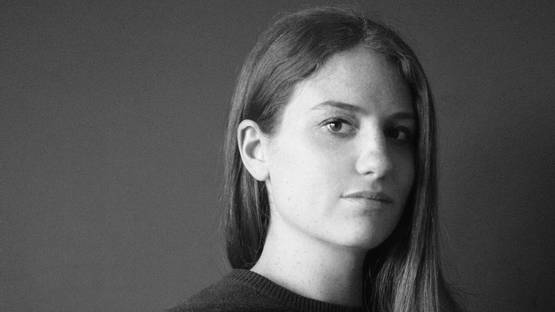 Investigating many compelling ideas and locations, Rachel Rose is a rising star of the contemporary American Art scene, whose brilliance resides in the ability to create deeply experiential video works that convey the sensorial aspects of these ideas. She imparts an experience of materiality through the moving images, manipulates both sound and image, translating what these topics or locations feel like by collaging and layering. Since her first piece, Sitting Feeding Sleeping, she was deeply engaged with the materiality of the digital, extending how people perceive their relationship to the world. Through a unique process of editing, Rose brings together disparate stories, eras, and histories, making them all coexist within one image, complementing one another.

Rose’s undergrad studies at Yale University in New Haven, where she obtained a BA in Humanities/BA in Art, were followed by an MA in Art History from The Courtauld Institute of Art in London in 2012, and MFA in Visual Art from Columbia University in New York a year later. She started out as a painter, but made a radical change in 2012, deciding that videos are the best outlet for her creativity. Before she started making videos, she knew next to nothing about the film. The artist recognized Walter Murch and his search for “a tool that could include what he was thinking about and what he was feeling; a tool for that deeply ephemeral, immaterial state. And I think I felt that painting was not the tool for me. It’s fortunate that I happen to have stumbled across this thing, which is totally the tool for me. But I am obviously exploring other methods as well.”[1] In fact, the greater part of her knowledge about the video came from Murch, an Oscar-winning film editor and sound designer (American Graffiti, Apocalypse Now, and many others) whose book In the Blink of an Eye is very influential for creators. After the transition from painting to videos, Rose was trying to expand what she thought she could do or what she was interested in. Somewhere along the way, she developed doubt about making art, and at the same time, about her status as an artist. These doubts originate in the never-ending dilemma of knowing what is meaningful and what isn’t. Documentary films have led her to learn how to research, write, shoot, edit, and design sound, but she is by no definition a documentary film-maker. Having realized that the part in which she enjoys the most is putting everything together (shooting, editing, traveling, cold-calling people) and that she is too attached to the surface and the materiality of putting the piece together and unfolding how that connects to the feeling within the work, Rose was finally able to accept herself as an artist.

She began as a painter

On October 1st, 2015, Rose opened her first solo show in London, titled Palisades. The show is essentially one work consisting of two interweaving videos within – A Minute Ago (2014) and Palisades in Palisades (2014), which together created a unique and site specific video installation, but also an immersive environment through movement, sound, and color. A Minute Ago is a piece she shot at the Glass House in New Canaan, Connecticut. It came from a very basic experience that she had in which she experienced a sudden gust of wind while being at the coffee shop. Everyone in the coffee shop became afraid, and Rose became aware of the glass barrier separating herself and the others from that gust of wind. This is how she developed an interest in the history of glass in architecture which led her to the International style movement within the modernist architecture which led her to the Glass House, where she eventually made the film. Something that occurs in a glass when it’s used in architecture is a relationship to collage – the glass window itself collages the image outside with the image inside different distances flattened together. So the work was basically a way of bringing this question of what is the relationship between catastrophe and collage, but also how is this inflected in everyday circumstances of buildings around us. In fact, both works address the questions of outside and inside. Palisades and Palisades is a video she shot at palisades Park in New Jersey, just across from New York City. The artist used a remote controlled lens in a combination with precise trompe-l'œil editing technique, in order to link a girl standing on the banks of the Hudson River to different moments in the landscape’s history, going from ancient past, the site’s involvement in the American Revolutionary War, to contemporary time. By juxtaposing seemingly unrelated events, Rose presented humanity’s shared current anxieties and our multi-layered interconnectivity: the advance of technology, mortality, the impact of history, and humans’ relationship to nature.

After Palisades (2015), her first solo UK show, and after having won the 2014 Illy Present Future Prize at Artissima Fair and Frieze Artist Award 2015, Rose will have her very first solo exhibition in the United States. In this installation entitled Everything and More, and presented at Whitney Museum, the artist integrates an essayistic, expository mode with an idiosyncratic poetry. “Through the compilation of seemingly unrelated material—first-person narration, music ranging from gospel to electronic dance music (EDM), and swirling chemicals—she has created a work that goes beyond its constituent parts to address ideas of human perception through direct experience and an emotive sensibility.”[2] The exhibition was also quite site specific and was also one of the very first shows to be on display at the Museum’s new Renzo Piano–designed building. Inspired by movies Interstellar and Gravity, Rose structured the piece around the interview with David Wolf, a NASA astronaut who made seven spacewalks throughout his career and spent 128 days aboard the Mir Space Station. His mesmerizing narration is complemented by a second voice, one that emerges suddenly and then quickly fades in a fleeting song. It is the voice of Aretha Franklin – more specifically from her critically acclaimed rendition of Amazing Grace sung as part of the 1972 performance at the New Temple Missionary Baptist Church in Los Angeles. The two sounds, Wolf and disembodied Franklin, weave in and out of the work, accompanying visual footage shot mostly in a neutral buoyancy lab in Maryland, or in Rose’s New York apartment.[3] The artist used the Trello software to create a storyboard, in which she can shuffle ideas as if they were on index cards, drawing new connections among the various subjects she is researching. The raw video and ideas serve as a temporary archive from which Rose makes selections and then arranges the final work. For her, this editing process became the primary act that generated (and still generates) meaning.

Rachel Rose – a Rising Star of the American Art Scene

"Deep down, for me, making anything is a struggle for meaning. My wanting to make something is organizing a feeling and trying to connect."[4] Making an artwork is the activity that feeds Rose’s compulsive need for things to become known. In her most recent work, Lake Valley (2016), she tells a story, following an imagined pet as it seeks attention on one particularly lonely day. In this cel animated video, the pet leaves its family in search of connection in the nearby green. The narrative is rooted in the theme of abandonment that permeates childhood in children’s literature. Abandonment, like a suburban house, is relatively ordinary experience sustained by everyday routines and anxieties.