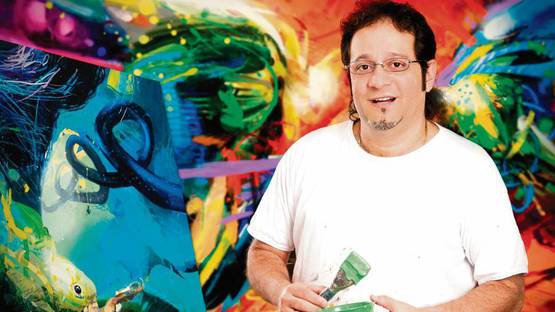 Rafael Espitia is a renowned Columbian contemporary artist who has spent last thirty years honing his unique style of colorful surrealism. His art ranges from cartoonish pop-art and black and white images of celebrities to bikini models painted in some mythical, cosmic atmospheres.

Some of his famous pieces include stunning portraits of Freddy Mercury, Michael Jckson, and Elton John set against an abstract background. The works, at first glance, look like a glorious colorful mess with no central focus, but after careful observation, one can make out the portraits of these famous singers. This and many other artworks by Espitia can also be viewed through 3D glasses, making them pop out at viewer for some futuristic affect.

The portraits are part of Espitia’s series titled Crash, made from a great variety of recycled materials including toys, books, CDs and video films. Working off two studios, one in Miami and the other in Colombia, the artist collaborate with eleven recycling boys who help him get materials and also get to help out with his work.

Born in 1967 in Cartagena, a port city on Colombia’s Caribbean coast, the artist began his career at an early age during the late 60’s and 70’s. At age 17 he was already studying at the Art Students League of New York. Additionally, he studied art and history of arts in Bogotá and Madrid, receiving many awards and recognition.

He is the owner of Espitia Gallery located in Miami's Wynwood Arts District.

Rafael Espitia is represented by Artemisia Gallery in New York.

Espitia divide his time between Miami, Florida and Cartagena, Colombia.