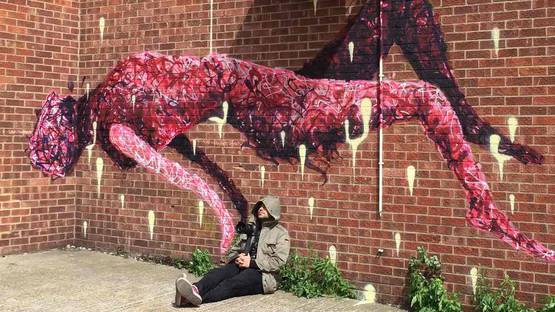 Walking down the streets of São Paulo, you can often see yourself get mesmerized by some of the amazing street art pieces that wait for you in almost every corner of Brazil's financial center. And it many cases, it just so happens that the mind behind those works is Rafael Sliks, a wonderfully talented Brazilian graffiti painter. Inspired by the intense urbanization and modern city life in general, Sliks creates very abstract artworks - both on the street and in the studio. He plays with the graffiti language and tries to see exactly where its boundaries lay.

Sliks is a thirty-year-old man living and working in the heart of São Paolo, a city he was born in and never left for a long period of time. The street art he represents is inspired by the degradation of São Paolo caused by both neglect and pollution, the two main reasons that cause many headaches to this great city's population. Since this artist stayed anonymous for the entirety of his career, we don't know much about his personal life other from the information he chose to give us. One such info is that Rafael's childhood was marked by a strong sense of loneliness no matter how many people were surrounding him. This unexplainable feeling has reflected itself in his expression so strongly it is still evident to this day. But we're getting ahead of ourselves. Sliks's career sprung relatively early in his life, during the year of 1997. As was the case for many of his fellow street artists, Rafael started as a part of a crew that was into tagging urban environments. The artist worked his way up from the ghetto and as he got more sure of himself and skilled over time, Sliks moved on to doing graffiti on the walls of the center of the São Paolo. Although tagging as a form of street art is commonly looked down upon, it has provided Rafael with some extremely valuable experience. It allowed him to develop his compositional skill, the general positioning of elements inside a bordered frame and it raised his self-confidence to a level he was ready to take on some bigger projects. From these early days, the main features of what will become an incredible career were already obvious. Sliks started establishing a surreal approach, creating a unique universe of dreams placed on urban environments he intervened upon. Although this became the focal point of his art, Sliks never stopped tagging walls with his name and kept at this practice for years now.

Sliks' graffiti are known for their strong abstract and surreal notes

The Style of His Graffiti

Since starting wall painting back in 1997, Rafael's style has evolved extensively. He chose not to redo the same imagery over and over again and kept challenging himself by trying new things and experimenting with the limitless possibilities of graffiti expression. Sliks's work is known for its unique approach in which he uses a technique common for canvas painting and adapts it for usage on walls. Quite logical when you think about it, the artist's experience in canvas painting makes sure his portfolio is full of traditional paintings as well. He is also responsible for many prints too. Whether he's painting on a paper or a wall, the artist has a consistent technique involving layering. Rafael has always been impressed and inspired by the movements of Art Nouveau, Surrealism and Expressionism - all of which had key roles in defining Sliks's style. Technically, his art is a synthesis of trials on color with a notable thickness of strokes. He uses many different types of lines to achieve his surreal feelings and his overall look can be described as fully abstract. Rafael's graffiti randomly switches between obscured figures to simple color strokes which dominate most of his works. The artist considered himself to be nothing more then a tip of an artistic spear that represents the 50-year-old evolution of graffiti art which became a kind of a trademark for the streets of São Paolo.

Sliks is not known just for his graffiti, as his canvas paintings are very impressive too

In the end, Sliks creates independent worlds of color and shape in which there are no more autonomous segments but only a unified and undividable body of art. Rafael depicts different perspectives, he mixes reality with fantasy and literally opens windows through which it's possible to peek into new, unexplored worlds and dimensions. Sliks mastered the graffiti medium, a skill very few people can confidently claim they've perfected to a point Rafael managed to reach. And have no doubt, Sliks is a true genius at what he does. His artworks are examples of perfect abstraction and are beautiful logos of São Paolo in a time when this city desperately needs some vividness.

The artist is represented by Dope! Gallery in London, England.