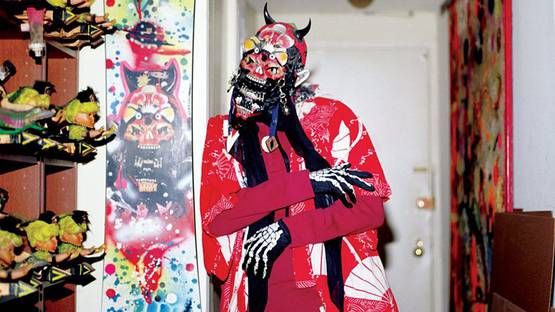 Rammellzee was an American street and performance artist, sculptor, writer, and hip-hop musician, famous for his Wild Style tag work that can be found all over the East Village in New York City. Rammellzee’s graffiti style, which is dynamic and vibrant, was created by a group of like-minded people in the 1980s and it is based on the illegible writing resembling the Gothic script. Rammellzee is also widely known for his performances and wearing extremely elaborate Samurai-like masks and costumes. During his short lifetime, he had many shows alongside with the eminent names such as Jean-Michel Basquiat and Futura.

Hidden Information of the Alphabet

Rammellzee was born in Far Rockaway, New York and just like many other urban kids of his age, he started painting graffiti on New York City subway cars already in his early teenage years and he has also shown a strong interest in the alphabet writing system. Intrigued by the power of language, he started to develop and explore potential new features of letters – he wanted to use them as weapons or in mathematical formulas. In 1979, when he was just 19 years old, the he wrote a manifesto called Iconic Treatise on Gothic Futurism, in which he claimed that letters, after being separated from their main function, are weapons that can be used to fight the oppression imposed by the linguistic systems. Rammellzee felt that if you control the language, you control the discourse, you control the power, claimed Henry Chalfant, an American photographer, videographer and avid follower of graffiti and hip-hop scene, who met Rammellzee sometimes in the early 80s and became curious about his artworks and manifesto.

When he was 19 years old, Rammellzee wrote a manifesto on arts and languages called Iconic Treatise on Gothic Futurism

Even though the aesthetics behind Rammellzee’s works seems inspired by science fiction, the he claimed there’s a strong connection between the secret script of the 16th-century monks and his own vibrant, imaginative alphabet. His pseudonym has an interesting origin as well – he stated that it is a quite complex word, derived from RAM plus M for Magnitude, E (Greek sigma) for the first summation operator, first L for longitude, second L for latitude, Z for z-bar, and again E (or sigma) for summation. Rammellzee's work has contributed to the literary and cultural movement of Afrofuturism because he was often describing the human language as a means of technological war. It is well-known that one of the main topics in Afrofuturistic materials is the use of language in order to transcend the digital divide, which is an economic and social inequality caused by the impact of communication technologies.  While it is true that Rammellzee’s work has been constantly associated with Afrofuturism, Rammellzee himself had stated there is no such thing as Afrofuturism. He considered his work as a part of the European medieval monk tradition. When it comes to his theory of Gothic Futurism, it was geared towards the deconstruction of English language and using its parts as a means of liberation and challenging the accepted standards of the typical alphabet.

Rammellzee was a very prolific creator, despite his short life. In addition to his numerous paintings inspired by his Gothic Futurism theory, he has also made various figurines and sculptures and performed in self-designed masks and costumes, which resemble the masks of Japanese samurai tradition. Different characters that Rammellzee invented represent, all together, the mathematical equation made of the letters in his pseudonym. He never wanted to show his real face to the public, so he was often wearing his elaborate  futuristic costumes but at the same time he was interacting freely with his surroundings, which was hilarious and bizarre, because of the weight and size of his huge costumes. His most famous Samurai-inspired masks were Chaser the Eraser and Barshaw Gangstarr,  both designed in 1994. Rammellzee was also one of the important hip-hop musicians from the New York City because he has introduced a unique singing style which influenced the contemporary music such as Beastie Boys and Cypress Hill. In 2010, after Rammellzee has died, Buckethead has released a tribute song named Rammellzee: Hero of the Abyss. When it comes to music, is also known to collaborate with Basquiat. Beat Bop is a single by Rammellzee and K-Rob, originally released in 1983 by Tartown. Initially, this single was distributed simply as a test pressing, but it ended up getting featured in the hip-hop documentary movie Style Wars, which cover was designed by Basquiat. There was a disagreement between Rammellzee and Basquiat about the style of this single since it is hard to categorize its chaotic sound. In the end, this single was awarded the status of Holy Grail of hip-hop records.

Even though Rammellzee has died when he was just 50, his life was already quite accomplished, full of adventures and successes. Most importantly, he managed to completely invent himself, which is not only every artist’s dream but also the famous American dream, the ultimate goal of personal freedom.  With his creative new alphabet and elaborate costumes and masks, Rammellzee has left an undeletable trace in the American street scene. His splendid work is now represented by the permanent collection of the museum in Los Angeles.

The artist is represented  by Vroom & Varossieau.

Rammelzee lived and worked in New York City.
Featured image: Rammellzee wearing one of his masks - image via sneezemag.com
All images used for illustrative purpose only.