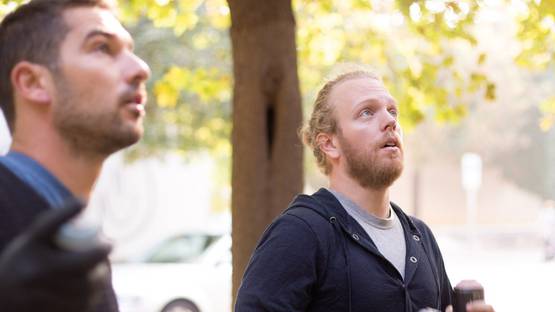 Raphael Borer (born 1984) and Lukas Oberer (born 1982) discovered their passion for painting already when they were young. The medium of graffiti played an important role in the youth of the artists, both from Basel, and defines their artistic development. A love of experimentation and the continuous exploration of the boundaries of their subjects form the basis of the collective exchange. Today, their works are known far beyond the borders of Switzerland and can be found throughout the world.

The first joint studio works were created in 2007. Since 2013 they have been working in the Kesselhaus in Weil am Rhein (D). Although both artists develop their own styles during the years they still decide upon joint works and the same medium.

In the search of an overriding unit of two different compositions, they adopt optical techniques to their own, for example the lenticular screen. Hereby the parallelism of two exceptionally individual works creates a new, overall composition.

Even today, the majority of their works can be found in the urban space. To escape the often restrictive format of the canvas, the collective often also uses façade painting. Hereby colors and forms are given the necessary space and stand in a dialogue with space and time.

The working style is characterized by a continuous give and take. Through further development and alienation, imitation and opposites. The process is hereby seen as an opportunity to create something new, epitomized in the equation 1+1=3.