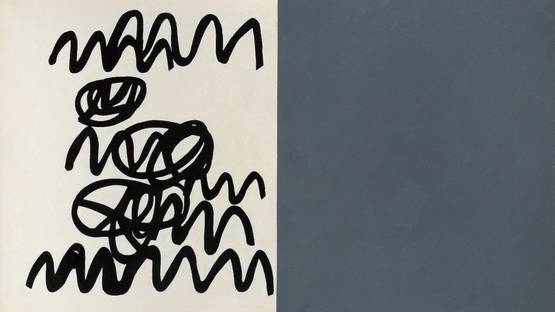 A Philadelphia-born action painter, Raymond Hendler is best known for animated yet simple compositions characterized by a joyful exuberance expressed through sensuous black lines and both geometric and amorphous shapes. Over the years, his work evolved from overall tightly wound linear webs to abstract pictograms that blend a personal language with hints at figuration.

Hendler began his career as Abstract Expressionist in Paris as early as 1949. Immersing himself in the Left Bank art scene, he formed close friendships with the Canadian painter Jean Paul Riopelle and the noted Australian sculptor Robert Klippel. He credited Kipple with support at a crucial moment that led to a career-defining breakthrough - an activity that involved the use of the automatic and the unconscious. Returning to New York in 1951, he became active in the burgeoning New York art scene, being the youngest voting member of the New York Artist’s Club.

Deeply spiritual at its source, his art had common roots in the use of the automatic and the unconscious, coupled with his concept of "further choice" and a commitment to a hard edge. His canvases are made up of lines, colorful right angles, and floating cartouches, which occasionally create picture environments that resemble gardens, skies, or artist’s studios.