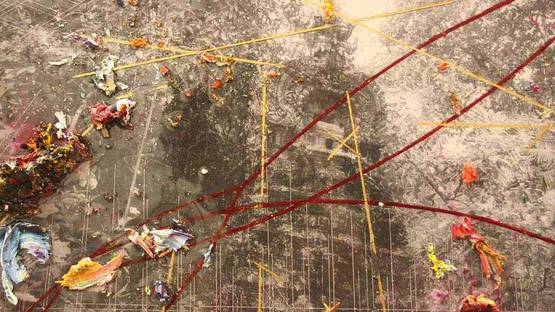 As a student of economy and politics, Reginald Aloysius got interested in the subject of globalization and its consequences. What are the direct impacts of the world becoming a global village on people and cultural traditions? Born in London, Aloysius is of Tamil and Sri Lankan origins. When he graduated from The Ruskin School of Drawing and Fine Art, he ventured deeper into the before mentioned subject. Traveling through India and Sri Lanka, he gathered a large quantity of data which he used for his art.Combining his knowledge, gathered source material, and drawing style, he creates art pieces which have an intellectual and traditional impression.

Combining his knowledgeand drawing style, his work has an intellectual and traditional impression.

His art pieces are double layered, with detailed temple drawings in the background and sharp lines in the front. Sharp lines being in the front, are the main focus of the art pieces and they are responsible for the technical element. Aloysius reversed the function of these two layers. It is expected for the temple drawings as the subject of the art to be in the front, but they are used as a background for the more noticeable color lines and other miniature details. Because of this, the viewer needs time to understand each art-piece. On the first look, they will look abstract, but if given enough time, temples, trees and rocks will form in the background. As if they are slowly emerging from a deep fog, while the lines are piercing flashes of light which constantly play in the foreground.

His art pieces are double layered, with temple drawings in the background and sharp lines in the front

Except for the visual role this double layered technique has, the second one is uniting modernity and tradition. The traditional temples are the foundation of the drawings, while modernity enters later, through the precise vectors which are based on airline flight paths. Aloysius doesn’t only combine modern and traditional; he also implements the time aspect of the development. Temples function as background, by which they come first on an art-piece, same as tradition comes before modernity and has an influence on the later. Tradition has an influence on the creation of modernity, but after modernity is completed, it starts to impact its forbearer. This impact can vary – from a simple modification to complete destruction of tradition. This is the influence of globalization Aloysius tries to show in his work; demystifying globalization as an innocent process which brings only good. In order for something new to be born, the old must be adjusted. It either needs to be moved to the background and be preserved or completely erased.

Beside combining modern and traditional; he also implements the time aspect of the development

Globalization brings novelties to people’s life, enabling us to be informed not just about our own culture, but also about every other which exists or has existed. Because of this, the phenomenon of development has a high value for humanity. But the other side of the coin must not be ignored. The ability to evolve brings the responsibility of preserving the elements which came before. Aloysius’s work has two functions: one is preservation and the second one is to serve as a reminder for everybody else to do the same thing – to develop through the creation and not through destruction.