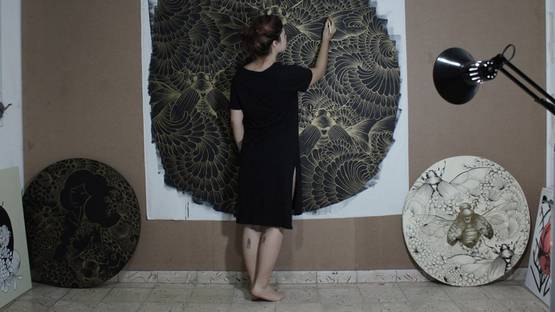 Remedios is a Colombian female visual artist and graphic designer whose work is based on the admiration of natural treasures. She also enjoys telling fantastic stories derived from the everyday life. Because of her eclectic background in design, illustration, street art and mural painting, in 2012 Remedios has founded a virtual platform called Shop for Remedies, where she develops her exciting projects in various visual arts. Remedios’ artworks are always based on careful study and meticulous work and her topics reveal her immense love for nature, small animals and plants.

Remedios aka Camila Maria Bernal Toro was born in Bogota, Colombia in the late 80. She started working in the advertising industry in 2005 and in 2010 she moved to Panama City, where she designed a female line of the Panama Converse brand. Even though she’s a very successful graphic designer, Remedios has a strong desire to create different artworks as well, unrelated to her industrial and fashion design projects. She feels drawn to the concepts of classical, Greek art and she’s particularly interested in the contrast between the classical and baroque values, between the Apollonian and Dionysian. Remedios believes that the idea of harmony, so fundamental to Greek art, or composition, structuring principle in the history of painting, have been forgotten, if not despised as relics and she wants to incorporate some of these old, traditional values into her artworks.

Remedios feels drawn to the concepts of classical, Greek art and she’s particularly interested in the contrast between the classical and baroque values

Chrysina is Remedios’ latest series, dedicated to the golden scarab, a rare insect species that exists only in Panama and some other countries in Central America. This animal seems magical and fantastic because of its beautiful golden shine and it has been appreciated and cherished throughout history. In Chrysina series, Remedios uses a limited palette, concentrating on golden hues, but she also pays attention to the typical ornamental character of her work, which became her signature style since her earliest series. Her another important series is called El Poemario Azul and it is the artist’s tribute to her father, Carlos Bernal. Mr.Bernal has collected and revised the poems he gave to his daughter, accompanied by illustrative notes on the circumstances and motives of his writing. With that starting point, Remedios has developed a series of paintings that constitute a coherent whole, but individually relate to each of the poems of her father. The most interesting part of the book is the fact that poems and paintings can exist and stand separately, but together they enlighten and enrich each other.

Remedios pseudonym can tell us a lot about her art and her personal goals as an artist. She wants to create artworks with healing properties, natural remedies in the form of art. She has achieved these goals since her pieces are warm, soothing and make us notice the beauty of our immediate surroundings. In addition to her paintings and illustrations, Remedios also creates large-scale works such as murals and she is a successful artist who had more than 10 solo and group shows in the last couple of years.

Featured image: The artist working in her studio
All images courtesy of the artist.