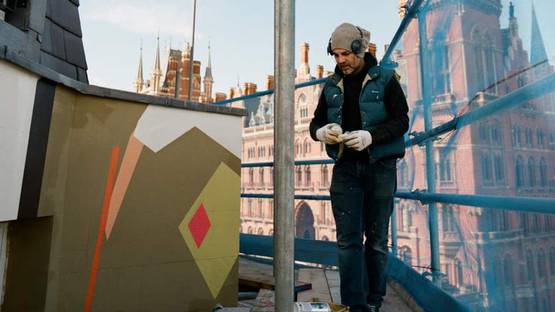 Remi Rough is a British artist, graffiti writer, designer, art director, curator, whose recent works could be described as “painting visual haikus”. South London born and bred, Remi has been breaking boundaries with the aid of a spray can and a paintbrush for over 28 years. Transcending the traditional and somewhat idealised vision of a graffiti writer, he is passionate and unforgiving in his creative progression.

He moved from the streets to the galleries with his debut art show in 1989 and has since gone on to exhibit in London, Paris, Perth, Tokyo, Santander, Los Angeles, Miami, San Francisco, Vancouver, Hong Kong, Berlin, Ibiza and more cities dotted around the globe. However, he still keeps his finger in the street art pie, taking part in New York’s Underbelly Project in 2010. As Arrested Motion wrote: “Remi is that rare breed of artist whose work you can equally enjoy in an outdoor setting and also in a gallery/home without it feeling awkward and out of context.”

His work has also appeared in the books; Graffiti World, Abstract Graffiti and Untitled III and was featured in the award winning ‘Ghost Village Project’. Remi was invited to speak on the underground history of UK graffiti in front of a sell-out auditorium at the Tate Modern, as part of its Street Art exhibition in 2008 and in 2009 he published his first book “Lost Colours and Alibis”.