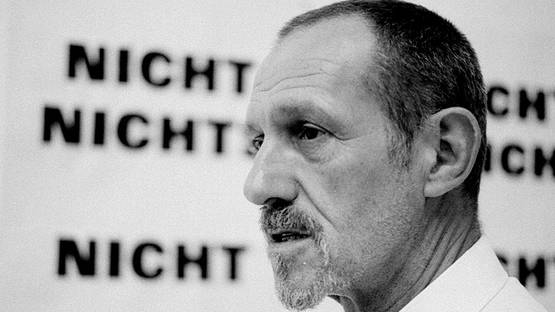 A Swiss painter, Remy Zaugg is primarily known as a conceptual artist. He played an important role as both a critic and observer of contemporary culture, especially with regards to the perception of space and architecture.

Born in 1943 in Courgenay, Jura, Switzerland, Zaugg lived and worked in Basel, Switzerland, and Pfastatt, France. After attending high school in Porrentruy, he attended the Basel School of Art. In 1971 he received the "Eidgenössisches Kunststipendium" (now the Eidgenössische Preis für freie Kunst), a Swiss arts prize for young artists. He exhibited all over the world, including venues such as Martin Gropius-Bau, Berlin, Musée d’art moderne et contemporain, Genf, Steirischer Herbst, Graz, Neues Museum Weserburg Bremen, Kunsthalle, Bern, Kunsthalle Basel, Centre Georges Pompidou, Paris. In recent years, he collaborated on architectural projects with the architects Herzog & de Meuron, including an extension to the Aargauer Kunsthaus in Aarau, and Zaugg's own studio, "Studio Rémy Zaugg" in Mulhouse-Pfastatt, France. Zaugg died in 2005 in Basel.

Concerning himself with seeing and blindness, Zaugg created works that are difficult to behold. Among his most famous works are flat typographical paintings, featuring short phrases in various languages, juxtaposing harshly clashing fluorescent colors that strain the eyes. These works also reflected his concerns with exploring language and perception as a medium for activating the spectator.