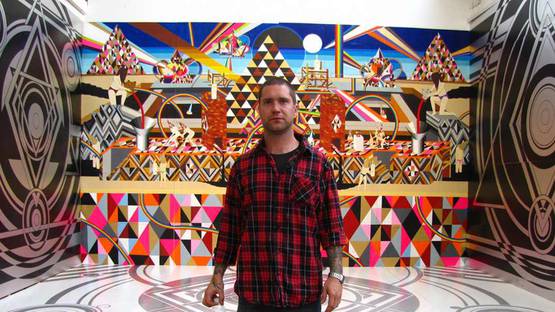 Colman was born in 1976 and grew up in leafy Bethesda, Maryland, a suburb of Washington, D.C.. Colman graduated from the School of the Museum of Fine Arts, Boston, Massachusetts in 2002 and has exhibited extensively throughout the world in both solo and group shows.

Colman between figuration and abstraction

Female forms, ceramic pots, animals, geometric and biomorphic shapes—these are all recurring elements in Richard Colman’s vividly colorful canvases. He vacillates freely between figuration and abstraction, at times focusing on pattern to such a degree that it overwhelms any recognizable components in his painting; other times he privileges figures and narratives. Also producing sculpture and installation works, Colman incorporates a variety of media, including pencils, paper, wood, porcelain, plaster, glue, nails, and tape—typically using vibrant colors. “Color is not something I am very comfortable with, I am not a natural colorist,” the artist has said. “For me, it takes a lot of work to figure that stuff out so part of it for me is just the challenge, but I also like the idea of making thematically dark paintings using very bright colors.”

Colman’s work ranges from small to large scale painting, murals and installations. Colman has been working as a professional artist for over a decade and recently completed a commissioned mural for Gagosian Gallery in Los Angeles.
Richard Colman currently lives and works in San Francisco, California.