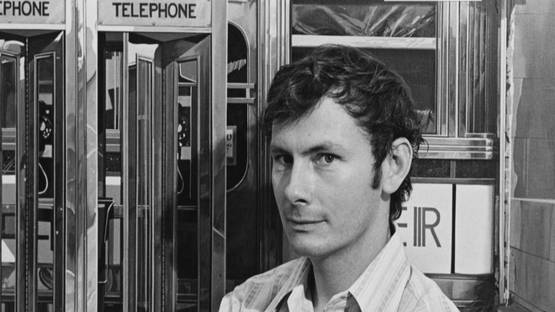 The interest in intersecting the city with traditional media of painting led Richard Estes of establishing prolific, outstandingly realistic and significant oeuvre. The very choice of themes navigated him in peculiar examinations of the city infrastructure respectively of its compositions, colors, and shapes. Although Estes is indeed one of the pioneering figures of Photo Realism, the domains of his artistic practice go far beyond that fact due to its strong conceptual foundation. His paintings are purified and idealized representations of emptied spaces without a human presence which lead us on concluding they are thought as displays of utopia; different realms released of any tension, noise and fuss which shapes our everyday urban experience.

Richard Estes was born in Kewanee, Illinois in 1932. From 1952 to 1956 he studied fine arts at The School of the Art Institute of Chicago and found himself inspired by realist painters such as Edgar Degas, Edward Hopper, and Thomas Eakins. Shortly after graduation, Estes moved to New York City and worked as a graphic artist with magazine publishers and advertising agencies for ten years. He also spent time living and working in Spain. By 1966, Richard Estes was able to focus solely on painting and in 1968 had first solo exhibition 1968 at the Allan Stone Gallery.

One Of The Founders of Photo Realism

Estes’s early works depict random passers in everyday activities, while with the ones from the end of the 60’s the artist became more focused on storefronts and buildings with glass windows and, more importantly, the reflected images shown in these windows, automobiles, and chrome.These paintings were based on color photographs he took; they have captured the astonishing reflections, which would change with the lighting and the time of day. Urban cityscapes are reflective, clean, and inanimate, and they function as some freeze frames of depleted reality. Therefore, Richard Estes is regarded as one of the founders of the international photo-realist movement of the late 1960s, with such painters as Audrey Flack or Duane Hanson.

The artist was known for strong pictorial composition

The Process of Richard Estes

In general use of photographs as the base for the each painting itself was Estes’s main principle. Interestingly, whenever the composition included stickers, signs, and window displays, they were always depicted backward because of the reflection. Although the artist has applied a certain amount of alteration in order to accentuate better the overall aesthetic effect, his main task was to maintain the central and the main reflected objects recognizable. The artist exclusively depicted sets during daylight hours, suggesting calm, tranquility, and vacancy. His striving to create convincing three-dimensionality on a two-dimensional canvas was quite fruitful, so his work has been described with a variety of terms, ranging from super-realism, sharp-focus realism, neo-realism, photo-realism, to radical realism.

The Stories Of The City

The works of Richard Estes are not only finely executed pieces of art, they are important and authentic documents of former city mapping and provide us powerful insight in urban development. By looking at his paintings we can follow odd and unexpected angles, extreme and unusual cropping, and multiple images which provide us with the artist strong impressions on the economical and architectural growth of the city. On the other hand, the very choice of precise and realistic display of these cityscapes suggest the importance of cinematic experience which gives Estes’s work additional pop (art) quality.

Through the years, the fame of Estes grow and his works have also been exhibited at the Metropolitan Museum of Art, the Whitney Museum, the Thyssen-Bornemisza, and the Solomon R. Guggenheim Museum. The artist was granted a National Council for the Arts fellowship in 1971 and the same year was elected to the National Academy of Design as an Associate member, and he became a full Academician in 1984. Although it might be said that his opus is dedicated to the city of New York, he avoided its landmarks. The paintings of Richard Estas provided fine detail that was invisible to the naked eye, so they reflect immense craftsmanship, artistry, but the well thought concepts as well.

Featured image: Portrait of Richard Estes - image courtesy of Ackermans fine art
All images used are for illustrative purposes only