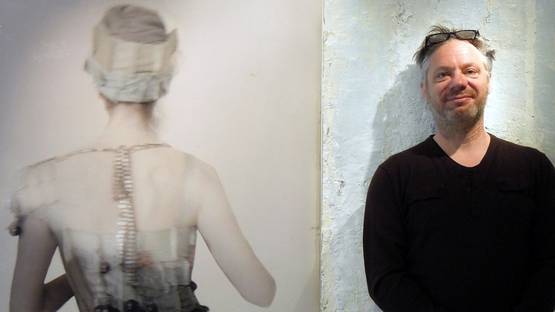 A drastic change in the approach is sometimes required in order to show the hidden, but true potential. Robbert Fortgens is a Dutch artist who’s revolutionized his style, moving from the realistic fine art of painting to devoting himself to the expressionistic way of painting, often going even further, engulfing his work in abstraction. It was a rapid and dramatic change, but it opened a world of possibilities for the artist to paint what he had always wanted to show. Even more, it allowed him to mix the painting with another passion of his - photography, creating unique looking pieces of art.

Seeing the work of Willem de Kooning at the Museum in Amsterdam in 1988 opened a new chapter in the artistic career of Robbert Fortgens. Recognizing how de Kooning surrendered himself to painting, creating highly personal and subjective view of the matters around him, forging a direct connection with whatever he painted, carefully choosing the paint – all of it was at odds with the Fortgens’ meticulous painting technique at the time. On one side, there was the photographic realism with its strong emphasis on the exact reproduction of the image motifs, and on the other, the famous abstract expressionism and de Kooning as one of its most prominent representatives, with the recognizable surrender to the painter gesture and the material being handled. So, quite suddenly, the artist made a rigorous choice of moving away from the fine figurative painting to the non-figurative expressionism. But Fortgens managed to merge the two extremes. Since his fine painting couldn’t provide the satisfaction and continue to fuel his inspiration, he had to introduce an imagination of reality, as felt by him, and he turned to the abstract expressionist image. Even so, Fortgens wasn’t completely satisfied and had to come to a new interplay of the two extremes, this time through another field of art.

After seeing de Kooning's work, Robbert Fortgens made a dramatic change in his approach

Besides painting, photography has long been Fortgens’ passion. This is not incomprehensible, comparing the important feature of photography – recording the reality, with the artist’s former mastery of the fine art of painting. In order to avoid the existence of unequivocal reality, the photography as a medium must be more than an objective view of the perceived reality. Fortgens brings both disciplines together, painting and photography, and connects them through his art. The possibilities and implications of lens, light and shutter speed, brush, brush and palette knife, build the plane through various materials and processes, creating unlimited possibilities for expression. Sometimes the photographic element will have an upper hand and sometimes the photographic elements and painted canvas will be placed next to each other, equally important. Whatever the choice is, there is no doubt that painting and photography go so in a sense intertwined, but remain at the same time as two peculiarities standing side by side. The photographed images and the painted compositions seem to answer or question each other, entering a dialogue with each other while maintaining their individuality and distinctive features. Through this method, Fortgens achieved the synthesis that provides literally a layered view of reality – a reality that constantly presents itself to the artist, every single day, everywhere.

The artist unites painting and photography

Robbert Fortgens has been painting since the age of 13. After high school, he studied at the Rietveld Academy in Amsterdam Field and was taught in subsequent years by Solomon Meir. During these years he became familiarized with various painting techniques and learned the craft of fine painting. He started working independently as a professional artist after studies, and he has since been exhibiting throughout the Netherlands. Fortgens is a versatile artist, whose artworks are included in many corporate and private collections, thus making him one of the famous painters in his country.