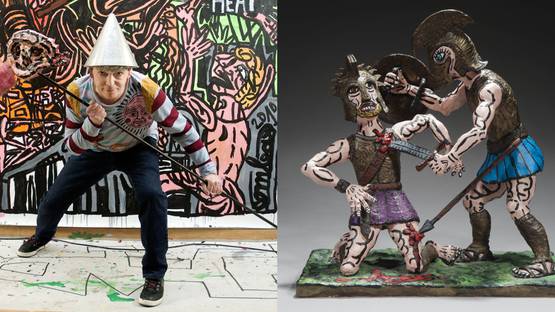 Robert Combas is a French painter and sculptor, born on May 25, 1957 in Lyon, France. His childhood and adolescence he spent in Sète, where he moved with his parents when he was four. His interest in art began at an early age. He started taking art classes when he was nine, and continued until the age of seventeen. In 1975 he enrolled the École des Beaux-Arts in Montpellier, France, which he attended until 1978. In that year he created his first paintings out of recycled materials, and started a band with Hervé di Rosa and Richard di Rosa. In those years Punk-rock movement had much influence on the art world in general, and decisive influence on Robert Combas. In 1979 Robert Combas, Hervé di Rosa and Ketty Brindel publish the art magazine Bato. In 1980, Combas held his first solo exhibition at the Galerie Errata in Montpellier, and in the same year, in Paris, along with Rémi Blanchard, François Boisrond and Hervé di Rosa, he was a founding father of the artist group named Figuration Libre. This movement could be said that was a reaction to Minimalism and Conceptual Art, and is considered to have roots in Fauvism and Expressionism. It is often thought linked with the other contemporary movements, such as Neo-Expressionism, and also seen that this movement has some of the pop culture influence incorporated in it. His inspiration during 1980s, Combas drew from fellow artists, such as Jorg Immendorf and Georg Baselitz, and as the movement grew he started to gain international recognition. In 1983, he held his first solo exhibition over seas, in New York at the Leo Castelli gallery.

Although Combas was formally trained in art, his notoriety was gained for his less sophisticated and more direct style of art. His work has always been strongly rooted in depictions of the human figure which are often in wild, violent or orgiastic settings. His canvases are large, and generally unstretched. While his works seem to always have an element of shock, he insists the images are meant to engage the viewer. As he states, in a biographical note on his official website, he asserts his aim is to “provoke, that is, to trigger a reaction in the spectator only to ‘invite’ him, beckoning him in and whispering in his ear ‘come over and talk to me, I want to tell you about the stupidity, violence, beauty, love, hatred, seriousness and fun, the logic and senselessness that pervade our day-to-day lives’ ”. Combas often seems to be critiquing of both the art establishment and society at large, in his art. The painting I am greedy man features a densely layered jostle of bodies, and in the middle ground two more fully realized figures, one in a business suit and the other muscular and shirtless. They dance in a swirl of text “I am greedy man/Please shout me babe/ Soul serenade is a lot of pussy/ Pussy gone on the Eiffel Tower/ My Eiffel Tower is long and large.” Many of his paintings include writing, and it is not uncommon for the use of street language to be seen in his works. Many of his paintings reference to famous people and cartoon characters. In the late 1980s his works become darker and gloomier. In the 1990s he starts writing poetry and works photographs over with felt tip pen. After the turn of the millennium music is again a great source of inspiration for him, and he creates paintings in cooperation with rock bands. "Ma peinture c'est du rock", (my painting is rock music) Combas said.