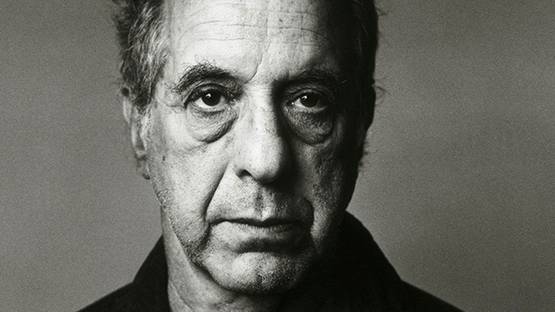 One of the most acclaimed artists with a camera in his hands, Robert Frank was an American documentary filmmaker and photographer originally from Switzerland. His incredible number of photographies feature candid glimpses of highways, cars, parades, jukeboxes and diners, revealing an underlying sense of isolation and hardship plaguing our societies from within. Among all his excellent work, Frank's fresh and nuanced outsider's view of American society represents the definite highlight of this man's career, as well as one of the most crucial projects of urban photography to date. When everything he brought to the table is analyzed, it is safe to say that Frank's black-and-white silver gelatin prints are a legitimate landmark in the evolution of photography, one of the youngest art medium. Although Robert later expanded his work field to cinema and video, as well as manipulating pictures and photomontage, his greatest contribution to art history will forever be his early candid picture-taking.

Robert Frank was born in Switzerland during the year of 1924. His parents, Rosa and Hermann, had the unfortunate circumstance of being Jews during the rise of the Nazis, making them stateless after losing their German citizenships. The family decided that the best course of action is to apply for the Swiss citizenship where their son was born and where Hermann's older brother resided. It was in Switzerland that the young Frank's family waited for the entire World War II horror to come to an end[1]. Robert's developing personality was, of course, highly affected by the circumstances of his childhood as the threat of Nazism greatly influenced his understanding of oppression. As a means of escape, the young man turned to photography, acquiring his training from a few local photographers and graphic designers. And as the Europe was being swallowed by the abyss of blood and terror, young Robert Frank was developing his photography skill. In the year of 1946, after the world conflict came to a halt, the aspiring artist created his first hand-made book of photographs, titled simply as 40 Fotos.

Traveling to the United States of America

In 1946, Frank emigrated to the United States and found employment in New York City as a fashion shutterbug for a famous magazine called Harper's Bazaar. After a while, Robert desired to travel and see the world in order to find some sort of inspiration that will allow him to push his art a few steps further down the quality line. He journeyed all around South America and Europe[2], making new hand-made books of photographs before finally returning to the Untied States in 1950. This year will prove pivotal for Robert as he did not only find inspiration for his photos but he also met Edward Steichen and participated in the group show titled 51 American Photographers at the famous Museum of Modern Art in the New York City. Soon, he married a fellow artist Mary Lockspeiser, with whom he had two children, Andrea and Pablo. By his own acclaim, Frank had many issues with the United States' society and culture as the fast pace and overemphasis on money characteristic to American life simply did not sit well with the young artist. He now saw America as a harsh and lonely place, a perspective that became evident in his later photography.

Ever since he was a young photographer, Robert Frank aimed at capturing candid images which he rarely altered in post-production processes

Robert Frank and The Americans

After a short period of time spent living in Paris, Frank and his family settled back in the Big Apple in 1953 and Robert continued to work as a freelance photojournalist for magazines including McCall's, Vogue, and Fortune. During this time, the photographer worked with numerous camera artists, such as Saul Leiter and Diane Arbus. Through his work and collaborations with colleagues, Frank helped shape the famous New York School of Photographers during the early and mid-1950s. In 1955, Robert secured a Guggenheim Fellowship from the John Simon Guggenheim Memorial Foundation, getting awarded with a trip across the United States and photograph every step of the way. For the first time in his life, Frank was traveling and making images across the USA, visiting such places as Detroit, Dearborn, Michigan, Miami, New Orleans, Houston, Los Angeles and Chicago[3]. He took his family along with him and spent the next two years of the road, during which time he took over 28,000 shots. The total of 83 images from that impressive amount were chosen and later published in the form of Frank's most famous project to date, titled The Americans. As he later admitted himself, Frank's journey through The United States was not without incident. He later recalled the anti-Semitism in a small Arkansas town and the time he was thrown to jail as the two biggest and most stressful obstacles placed before him during the making of The Americans. Nonetheless, this surgical dissection of American culture remains one of the most detailed and most honest analysis of USA society to date.

Although Robert Frank had a career full of fantastic achievements, his project titled The Americans is a definite highlight of this photographer's work

Life After The Americans[4]

The time after publishing The Americans was a tough period for Frank. Because many were offended by the honest Robert presented them with his project, the photographer had some troubles finding employment. Regardless, the artist continued to inspect the USA society and make more of his images aimed at documenting both the dark and positive side of America. Frank waited for over five years before he got a shot at holding his own individual show for the first time. In 1961, Robert presented his art at the Art Institute of Chicago, followed by a MoMA show in 1962. It took some time to occur, but The Americans eventually became accepted and rejoiced by the Untied States and its society, transforming it into an excellent reflection of all levels of American citizenship. However, by the time The Americans started to be truly received by the United States, Frank had moved away from photography to concentrate on filmmaking. This new medium became Robert's new creative love as the common rejections from the photography circles further spurred his turning towards the cinema.

Entering the film industry marked a big shift in Robert's career. Among his earliest movie was the 1959 Pull My Daisy, a movie which was written and narrated by Kerouac. It featured Ginsberg, Gregory Corso and other actors from the famous Beat circle. Because of amazing performances, many believed that Pull My Daisy was an improvised film, a theory that is probably at least partially true as Frank transported many of his candid photography habits to the cinema world. However, Frank's co-director, Alfred Leslie, never admitted that to be true, insisting that the movie was carefully planned, rehearsed and directed[5]. Another aspect of Pull My Daisy wowed the audiences - fantastic lighting. Robert had much experience with lighting the subjects in front of his camera and that aspect of the film was a true phenomenon at the time. The next great film made by a photographer turned director was Sin of Jesus, a movie which was based on an Isaac Babel's story. The plot was centered around a woman working on a chicken farm in New Jersey. Filming the Sin of Jesus was a drawn out process which lasted a staggering six months, a very long time for a low production film at the time. During that period, Robert lived in the basement of a friend whilst his family stayed at home in New York.

In 1972, Robert's arguably greatest film ever was made. It was based on the life and art of the Rolling Stones and was called Cocksucker Blues. The film shows the Stones on tour, engaging in heavy drug use and group sex. After its release, Cocksucker Blues became a rock and roll Bible. Concerning his experience of filming the legendary British band, Frank stated the following: It was great to watch them — the excitement. But my job was after the show. What I was photographing was a kind of boredom. It’s so difficult being famous. It’s a horrendous life. Everyone wants to get something from you. Mick Jagger loved the film but said that he does not expect that the United States will ever open its gates to Roling Stones after watching how they behave on film. What followed was a long lawsuit battle disputed whether Frank as the artist or the Stones as those who hired the artist owned the copyright. Ultimately, the court reached a compromise[6] - Cocksucker Blues would be shown only five times per years and Robert had to be present during projections. Other notable films made by Robert are Me and My Brother, Keep Busy and Candy Mountain.

The Return to Photography

Even though Robert Frank continued to be interested in film and video, he returned to the art of still images in the late 1970s, publishing his second photographic book titled The Lines of My Hand in the year of 1972. Many have described this work as a visual autobiography of the artist since the project consisted largely of personal photographs. What followed were numerous series and projects aimed at investigating all sorts of aspects of our societies. However, not one of these collections had an impact even comparable to that of The Americans. As some critics have pointed out, this is perhaps because Frank began playing with constructed images more than a decade after Robert Rauschenberg introduced his silkscreen composites. In the meantime, Frank remarried - his new wife was a sculptor June Leaf. The married couple moved to Mabou, Nova Scotia in Cape Breton Island, Nova Scotia in Canada[7]. Since arriving here, Frank's life was full of hardships. His daughter Andrea was killed in a plane crash in Tikal, Guatemala, whilst his son Pablo was first hospitalized and then later diagnosed with schizophrenia. Much of Frank's subsequent work dealt with the impact of the loss, making his mature art the by far darkest chapter of his work. In honor of his daughter, Robert founded the Andrea Frank Foundation in 1995, an institution which provides grants to artists.

During his career which lasted for over sixty years, Robert Frank managed to leave an amazing mark on both photography and filmmaking

The Cruciality of Robert Frank and His Imagery

Robert's photos offer a complex critique of our society covering the time lapse of over half a century, presenting us with one of the most fundamental studies for anyone interested in this period. Frank captured both the extraordinary and the common, famous and ordinary, never allowing anything to stand in the way of his art. And ultimately, his effort paid off as Frank effectively transformed his work into a genuine landmark of the photo-making medium. Nowadays, although he is still active as an artist, Robert and his images serve as an inspiration and reference to anyone desiring to become a creator of this sort of art. And out of everything this photographer is capable of teaching the younger practitioners, his quotes are just as worthy as his photos:

There is one thing the photograph must contain, the humanity of the moment. This kind of photography is realism. But realism is not enough—there has to be vision, and the two together can make a good photograph.

This artist is represented by Stephen Bulger Gallery Toronto.

Robert Frank died in 2019 at the age of 94. He lived and worked in Nova Scotia, Canada.

Featured image: Robert Frank - Photo of the artist, 1996 - Image via Koos Breukel. All images used for illustrative purposes only.