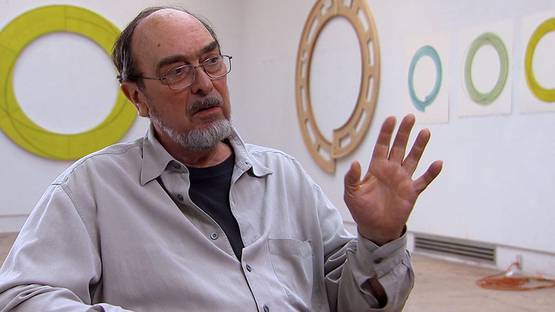 Paint less to say more – that’s always been a motto of Minimalism. The work of Robert Mangold isn’t that much different. He paints minimalistic artworks and he could be described as an abstract artist. The simple elements are put together through complex means as he explores and creates his own artistic vocabulary which is derived from the ideas of geometry and asymmetry, expressed through both shapes and forms. Through his clear and direct artworks, he has established a variety of relationships, such as shape in relation to space, drawing in relation to the edge of the canvas, and he constantly questions the relationship between the parts and the whole.

Mangold feels that the painting is quite a difficult art to grasp, especially if it’s an abstract piece since it simply doesn’t possess an anchor for the people to grab hold of. In relation to installations or sculptures, who exist in the space and around which people can walk and observe from all the angles, painting is something that’s hanging on the wall, with a clear space between itself and the viewer. The shape has always been very important for Mangold, and they have changed over the years, going from squares with the corners cut out, double triangles, to half circles.

The shapes have changed over the years

All paintings elicit space, not within the piece, but rather the space occupied by the painting, and that’s also an important part of Mangold’s work. He likes working in large formats because of the sense of relative scale from the viewers to him. There are limitations, of course, and the artist prefers to make artworks that are relative to a human size. He does make smaller pieces, but only as studies for the bigger ones. For him, the culmination of the idea is expressed through larger work. What is also interesting about his work is the constant exploration of the relationship between the fragments and the whole, and his ability to give each individual fragment a function as a whole. As the artist states, a half-circle is a complete shape despite the implication that it’s not a complete shape. This struggle between the complete and incomplete has been explored in different series, and through different means.

Mangold was born in North Tonawanda, New York. He studied at the Cleveland Institute of Art in Ohio, and at the Yale University School of Art and Architecture in New Haven Connecticut, where he earned his BFA in 1961 and his MFA in 1963. Robert is married to Sylvia Plimack Mangold, who is also an artist. Since his first solo show in 1961, he has exhibited at some of the most prestigious institutions around the world, including the Stedelijk Museum in Amsterdam, Kunsthalle Basel, and the Solomon R. Guggenheim Museum in New York.

All artists should rely on their intuition. It is going to make their work more personal and give it a quality that no other artist possesses. Mangold, even when planning what is he going to paint, relies on his instincts. The choice of a color simply hasn’t got a rational justification behind it, except maybe to induce reflection in viewers. He considers his paint not to be a paint in a traditional painter’s sense – it is just a color. Even if he works on the surface that’s very uneven, the artist prefers to apply the color with the roller rather than a brush.

He is represented by Gregg Shienbaum Fine Art in Miami.