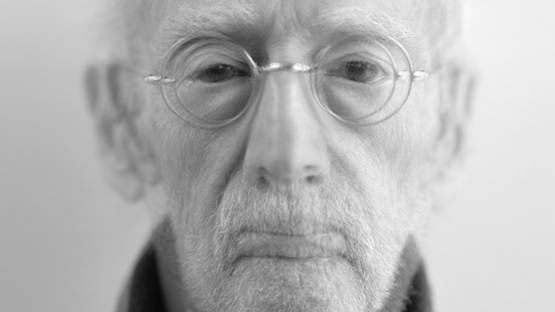 Robert Morris was an American sculptor, conceptual artist and writer. He was one of the most prominent theorists of Minimalism and also made important contributions to the development of performance, minimalism, land, the Process and installation art.

He was born in Kansas City, Missouri and turned to art and art criticism after studying engineering, eventually writing a 1966 master’s thesis on Constantin Brancusi at Hunter College, New York. Initially a painter, Morris’ work of the 1950s was influenced by Abstract Expressionism and particularly Jackson Pollock. While living in California, Morris also came into contact with the work of La Monte Young and John Cage. The idea that art making was a record of a performance by the artist (drawn from Hans Namuth’s photos of Pollock at work) in the studio, led to an interest in dance and choreography.

Morris’s early sculpture tended to emphasize a banal repertoire of form and subject-matter, while attempting to investigate the role of language in artistic representation. Through an influential series of articles that began to appear, irregularly, in the New York art press c. 1966, Morris assumed a highly visible position in determining both the objectives and the tenor of Minimalism in America, then in its early stages. During the 1960s and 1970s, Morris played a central role in defining three principal artistic movements of the period: Minimalist sculpture, Process Art, and Earthworks. In the late 1960s and 1970s, the rigid plywood and steel of Morris’s Minimalist works gave way to the soft materials of his experiments with Process Art. Subsequent projects Morris made during the late 1960s and early 1970s include indoor installations of such unorthodox materials as dirt and thread waste, which resisted deliberate shaping into predetermined forms, and monumental outdoor Earthworks.

In the late 1960s, Morris began introducing indeterminacy and temporality into the artistic process, referred to as Process art or Anti-Form. By cutting, dropping, or stacking everyday materials such as felt or rags, Morris emphasized the ephemeral nature of the artwork, which would ultimately change every time it was installed in a new space. This replaced what Morris posited as the fixed, static nature of Minimalist, or "object-type," art.

When a collector, the architect Philip Johnson, did not pay Morris for a work he had ostensibly purchased, the artist drew up a certificate of de-authorization that officially withdrew all aesthetic content from his piece, making it nonexistent as art.