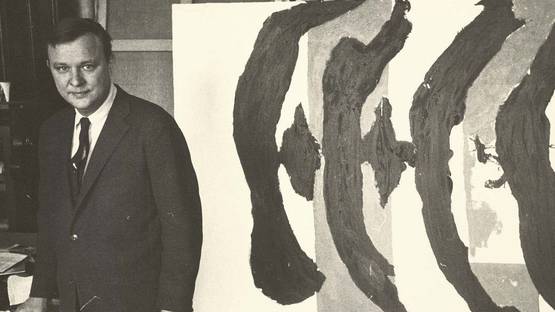 Considered as one of the most eminent American Abstract Expressionist painters, Robert Motherwell is not just a founder of the New York School, alongside Philip Guston, Willem de Kooning, Jackson Pollock, and Mark Rothko, but has also proved himself as an editor, printmaker, theorists, and a writer. His impulsive and intuitive approach that has been influenced by the Surrealists can be seen in his paintings. Motherwell tries to unravel the deeper meaning of reality, something that is never seen and unrecognizable. Some of his most iconic works are related to the Spanish Civil War, which left quite an impression on the artist. Robert’s desire to explore, allowed him to move from one medium to another, from paintings and prints to sketches, collages, and drawings. His mission is to create substantial and eye-catching art imagery, which will transcend pure emotions, truth, and authentic feelings.

The painter was born in 1915 in Aberdeen, Washington, as the first child of Robert Burns Motherwell II and Margaret Hogan. He grew up in San Francisco, California, where his father worked as the president of the Wells Fargo Bank. The asthmatic problems took him to the Pacific Coast, whose beautiful landscapes, vast spaces, and vivid colors, later became the integral characteristics and elements of his abstract paintings. At the age of 11 Motherwell was awarded a fellowship at the Otis Art Institute in Los Angeles, and unlike many of his peers, he had formal education, which he got by studying painting at the California School of Art. Although Motherwell hoped to become a philosopher, and received a BA in philosophy at the Stanford in 1937, and earned a Ph.D. at the Harvard, life has chosen a different path for him. During 1938 Robert went on a year-long journey to Europe. When he came back he moved to New York, where he decided to study the history of art at the Columbia University, under the famous Meyer Shapiro.

During 1938 Robert went on a year-long journey to Europe

At the Stanford, the artist got into contact with the philosopher Alfred North Whitehead, who introduced him to the concept of abstraction. The most valuable lesson that Motherwell learned was how to remove inessential, and show only necessary. The modernist touch in his work comes from reading symbolism and other literature from Mallarmé, James Joyce, Edgar Allan Poe, and Octavio Paz. It was Meyer Shapiro who arranged that Motherwell studies alongside Kurt Seligmann. With his help, Robert got to know Parisian Surrealists like Max Ernst, Duchamp, and Masson. This proved to be a substantial influence in all of his future artworks. In 1941 while going together with Roberto Matta to Mexico by boat, the young artist met Maria, his future wife. Here he made eleven drawings, known as the Mexican Sketchbook. Motherwell showed the fascination with Asian calligraphy, so he used pen and ink to paint Japanese haiku poetry, and to present his interest in Zen.

Robert got to know Parisian Surrealists like Max Ernst, Duchamp, and Masson

The method called psychic automatism, or artfull scribbling as Robert Motherwell named it, represents a free movement and wandering of brushes and pens over the surfaces, in which the artist allows the unconscious impulse to have the major role. This approach defines the Abstract Expressionism- putting ‘accidents’, ‘incidents’, materials and textures to be in the foreground. In 1943 Peggy Guggenheim offered him to display his series of collages. This life in a time opportunity was taken immediately, so this American artist incorporated mixed torn paper, violent themes, and expressive paint, in a relation to the Second World War. As a multi-disciplinary artist, he combined different media like collages, prints, and paintings, with diverse techniques such as oil and acrylic paint. Besides this, he introduced lithographic methods and began to use cigarette packets and artists supplies. Throughout his career, Motherwell strived to discover the personal and political meaning of his abstract art.

This approach defines the Abstract Expressionism- putting ‘accidents’, ‘incidents’, materials and textures to be in the foreground

The Unique Pieces and Series

In 1948 something that began as a small drawing, became maybe the most recognizable legacy of Motherwell. The Elegy to the Spanish Republic series contain over 150 works, including canvases, drawings, prints, studies, and all of them represent artist’s intellectual and emotional involvement with the Mediterranean culture. They commemorate the death and the loss of liberty, as the result of the Civil War that ended by the Spanish Republic defeat in 1939. Parallel to this, the era of enlightened humanism has disappeared with it. Through these paintings, he found black as one of the subjects, and its combination with white evokes the sense of life and death. Another pivotal moment in Robert’s career is immortalized by the Iberia project, titled by the region in Spain. In this case, Motherwell makes a transition from figuration to more pure and symbolic abstraction. To some, they remind of the bull, but they are actually about black, the most present color, and element, from which the work can occur.

The Elegies to the Spanish Republic series contain over 150 works, including canvases, drawings, prints, and studies

The Highly Talented and Appreciated Man

Because of his intellect, youth, and energy, Motherwell was considered a leading advocate of the New York School. Robert lived in Greenwich, Connecticut, and was a teacher at the Hunter College, but he also directed the publications of the The Documents of The Modern Art. His writing and editing skills could be seen in essays on art and aesthetics. The author died in 1991 in Cape Cod, Massachusetts. Since his first solo exhibition in 1939 at the Raymond Duncan Gallery in Paris, his works have been displayed in various cities and museums around the world, such as the Arts Club in Chicago, the San Francisco’s Museum of Art, or the Museum of Modern Art in New York. His exhibitions took place at the Kunsthalle Düsseldorf, the Royal Academy, London, and at the National Gallery of Art in Washington.