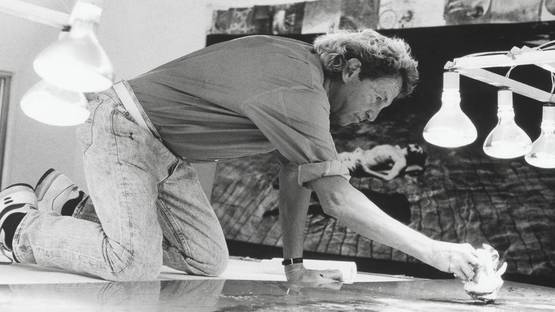 Having the great impact on late 20th century visual culture, Robert Rauschenberg was one of the central figures in the development of post-war American art. His works bridge the gap from Abstract Expressionism to later modern movements. As a part of Neo-Dada movement, his innovative approach expanded the former boundaries opening the possibilities of experimentation for further artists. Although considered as a renegade of the 50’s, his predecessors and contemporaries showed a great respect for him. Unlike them, Rauschenberg decided to move forward with the new idea of art that repeated the earlier Dada postulates. His innovative theories and new approach to the definition of a work of art and the artist’s role have moved from a conceptual perspective that considered mark of the brushstroke as a reflection of the artist’s inner world toward employment of both traditional media and found objects, following his belief that painting is related to “both art and life”. His pieces are between these two realms and in constant and indispensable dialogue with the viewers.

Born as Milton Rauschenberg in 1925, in Port Arthur, Texas, he grew up in the family of Fundamentalist Christians and it was quite normal that he planned to become a minister. As an avid and skilled dancer, he gave up this idea when he realized that the church considers dancing for a sin. He also drew a lot, copying images from comics, but nobody took seriously his talent. In accordance with the wish of his parents, he attended the University of Texas at Austin where he studied pharmacology. After refusing to dissect the frog, he was expelled and the letter that arrived at the same time calling him to join army actually saved him from the announcement about an early end of his student days. Rejecting the idea of killing people on the battlefield, he served as a medical technician in the Navy Hospital where they cared for the survivors in San Diego. After the war, he started his painting studies at the Kansas City Art Institute and at the Academie Julian in Paris where he met his future wife, Susan Weil. He changed his name from Milton to Robert, because he thought it sounded more artistic. From 1949 to 1950 he attended Black Mountain College in North Carolina, under one of the Bauhaus artists, Josef Albers whose courses were based on strict discipline deprived of experiments. Great artist was a harsh critic of his student’s work, but his course on materials where he taught them to explore the line, texture, and color of common materials left a mark on Rauschenberg’s assemblages. Later, Rauschenberg described his teacher as a respectful man influencing him to do exactly the reverse as his departure point in the world painting.

Early paintings of Robert Rauschenberg are influenced by Josef Albers

During the first two years of the 50’s, spending his academic years at the Art Students League in New York and summers at the Black Mountain College his ambition has increased so much that provide him a prestigious solo show at the betty Parsons Gallery in New York where he showed his series of White Paintings (1953). Robert Rauschenberg started to use the roller for the application of the white house paint onto his canvases that were under deliberate influence of their surroundings, reflecting every change of shadows. At the same time, Rauschenberg was explored the black as the total opposite and his Black Paintings (1951) were painted with the thick layers of paint, but with the implementation of newspaper scraps. Some of the major influences occurred during his stay at the Black Mountain College, referring to his encounter with minimalist composer John Cage and the choreographer Merce Cunningham who were the teachers there. They both have been the supporters of the use of chance methods, found objects and common experiences within high art. His early works relied on Pop Art and from the late 50’s he used the newspaper and magazine photographs in his paintings inventing the method of transferring images directly onto the canvas with solvent. Using the silk-screen stencil technique that would later be adopted by Andy Warhol, he created refined compositions inspired by the themes from modern American History and popular culture.

In fall 1952, Rauschenberg was divorced and after the Weil took their son and left to live with her parents, the artist decided to travel Europe and North Africa with Cy Twombly, his colleague from the Art Students League and intimate partner. That was the time when he made his first assemblage from the junk he found in the Italian countryside. His return to the United states was followed by further experiments in painting, with the red color this time. Resembling the Black paintings, the Red series (1953) also had the various surface textures with the implemented newspaper’s sheets. Improving and upgrading his experiments, he started to include new objects, from parasols to parts of a man’s undershirts. Rauschenberg coined the name of his innovative works, calling them combines because they represent the mixture of paint and practically sculpture on the canvas. His field of action also included photography, printmaking, and performance. Gathering garbage from the streets of New York, Rauschenberg implemented those found object into his work, giving them a new meaning. Combines refer to his work from 1954 to 1962, but he combined both painting and different objects throughout his career. At the end of 1953, Rauschenberg met the young painter Jasper Johns and two years later they started to live together, becoming romantic and artistic partners. Compared to the relationship that Pablo Picasso had with Georges Braque, two artists spent their time exchanging ideas and encouraging their mutual exploration that moved the boundaries of the known in art. They shared the same philosophy that shaped Neo-Dada style, adopting the accidental beauty in everyday life instead of the coded psychology of Abstract Expressionism. An increasing popularity of Jasper Johns, his face on the cover of Art News magazine and MoMA’s purchase of his paintings caused the jealousy and tension between the pair that resulted in final ending of their relationship in 1961.

1964 Venice Biennale and A Modern Inferno

Always interested in new technologies, Rauschenberg co-founded Experiments in Art and Technology (E.A.T.) in 1966, with the aim of encouraging the collaboration between the scientists and artists. By this time, his name already became respected within the art world. His American fame was followed by the European, after the exhibition at Whitechapel Gallery in London and Venice Biennale in 1964 when he won the first prize for painting, the first one assigned to an American. In 1965 he created one of his most famous pieces A Modern Inferno designed for Life Magazine in the occasion of the celebration of Dante’s seven-hundredth birthday. The 70’s represented a comeback of assemblages that used same techniques and imagery as earlier but now in the combination with more color and on a larger scale. During the 80’s Rauschenberg was engaged in traveling and spreading the idea that art could change the society, founding the Rauschenberg Overseas Culture Interchange (R.O.C.I.) for that purpose. He visited primarily Communist countries, in spite of current American Cold War policies organizing exhibitions of his work inspired by the host country.

The Legacy of Robert Rauschenberg

Engaged in a reassessment of the definition of the artwork and role of the artist, making the turn from a conceptual outlook where artistic authenticity lied in the artist’s inner world towards interaction with popular media and mass-products that reflected artistic vision, his work ranges somewhere between the art and life, his pieces questioned the relation of artistic and everyday objects. In 1996 Rauschenberg went on a rehabilitation from alcoholism which deteriorated his health. A few years later he broke his hip which led to a stroke and the paralyzing of his right side. Still, he learned to use his left hand which enabled him to work until his death on May 12, 2008, from heart failure. Later modern movements were directly influenced by the Robert Rauschenberg’s work of the 50’s and 60’s. His combines and silkscreen printing experiments led to the further development of the same techniques by the hand of Andy Warhol and Roy Lichtenstein. His Dada-based theories about the definition of art helped the foundation of Conceptual art, later performances had a source in his collaboration with John Cage and his tendency to borrowing images from popular media and fine art influenced postmodern aesthetic of appropriation. In 1990, he initiated the Robert Rauschenberg Foundation (RRF) with the aim of promoting humanitarian issues. Today, his Foundation possess his works from every period.