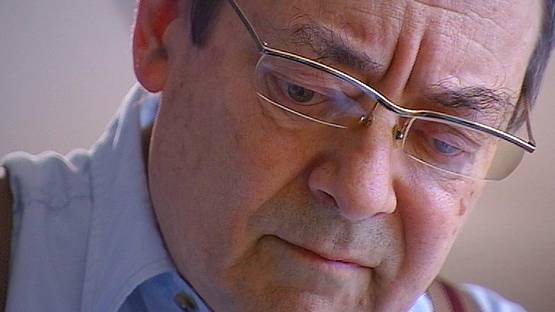 Robert Ryman was an American painter identified with the movements of monochrome painting, minimalism, and conceptual art. He is best known for abstract, white-on-white paintings.

When Ryman, born in Nashville in 1930, Tennessee, arrived in New York in 1952 to study, his first ambition was jazz rather than art. He took a job as a guard at the Museum of Modern Art and worked there for seven years; during this time he became increasingly interested in the visual arts, and began painting. His development as a painter was not so much a linear process as a concentration on one theme: the pictorial complexity created through a reduced, extremely restricted visual vocabulary. By manipulating scale and texture in his work, Ryman created variations on the square format and the color white.

His paintings evoke an awareness of the act of painting, namely by drawing attention to brushstrokes, surfaces, and materials, as well as to the edges of the image and the relationship between the painting and the wall it hangs upon. Ryman’s art has often been described as Minimalist or Conceptual, while he prefers to use the term realistic, aiming not to create illusions with paint but to investigate the concrete presentation of painterly materials. Ryman experimented with painting on canvas, linen, and steel, as well as with different painting materials, techniques, and with printmaking.

It was not until the late 1960s that he began to exhibit regularly; he had his first solo show at Paul Bianchini's gallery in 1967, at the age of 36. His first solo museum exhibition was held at the Solomon R. Guggenheim Museum in New York in 1971. He held subsequent exhibitions at documenta 6 and 7 in Kassel, Germany, and at the Museum of Modern Art, the Solomon R. Guggenheim Museum, and the Metropolitan Museum of Art in New York. In 1983, a permanent exhibition of Ryman’s work was installed at the Hallen für neue Kunst in Switzerland, and an extensive solo exhibition was held for him the year he turned 70, at the Haus der Kunst in Munich.