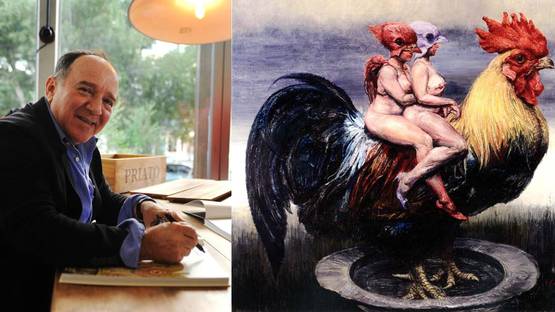 Roberto Fabelo is a widely known Cuban painter, illustrator and sculptor, and one of the most respected premier contemporary artists from Cuba. He is perhaps best known for his captivating artworks that depict nude woman with bird-like features, such as beaks and wings. Fabelo was born in 1950, Camagüey, Cuba and is a member of “the generation of sure hope” whose art was reinvigorated by the creative environment of the 1980s.

A printmaker and an illustrator of many books, including those of Colombian novelist Gabriel García Márquez, and a creator of assemblages and installations, Fabelo received an award at the First Havana Biennial for Fragmentos vitales (Vital Fragments, 1984), a piece consisting of drawings done on irregularly cut Kraft paper and glued directly to the wall. Since then, his work has attained broader recognition from the art community in Cuba and abroad. As he cites, his influences are rooted in European art history: “Two great Spanish masters, Velázquez and Goya.” In contrast to compatriots like Rubén Alpízar or Reinerio Tamayo, who parody and subvert all references to the European canon, Fabelo’s emphatically modern consciousness is anchored in the trinity of style, authorship, and originality, notions that were reintroduced into contemporary Cuban art in the last decade by a revived interest in aesthetics and in traditional painting genres.

Fabelo started doing watercolors in 1988 as a minor pursuit, but they have since assumed a more definite place in his artistic practice. With his increasing mastery of watercolor technique and exploration of larger formats, he has become the demiurge, or divine creator, of a world of his own. In it, he mixes Jonathan Swift’s acid humor, nocturnal denizens of the Moulin Rouge as immortalized by Toulouse-Lautrec, and the style of Spanish Baroque painting. Those cultural cross-currents give rise to a human comedy played out in a theatrical space. He juxtaposes the naturalistic depiction of characters with their staged and compact placement on a sofa or behind theatrical curtains. His deft hand captures each character in a defining gesture or attitude, and clothes him or her in a way that reveals the individual’s own psychology. The realistic appearance of those beings suggests that the artist is like a hunter of faces, stalking his prey in the corners of Havana. But this humanity, genetically tainted by tropical animals and fruits, deities, shy mermaids, feathered heads, is a faithful reflection of his imagination. Clustered on a sofa or gathered around props in an empty theater, his characters wait in awe for an event that will never happen. They seldom look at or talk to each other, and even the dogs share the same baleful glare as their owners. The juicy, Rubenesque nudes do not inspire lust or competition, but only add to the strangeness of the situation.

Fabelo has been awarded with numerous awards, both national and international, and his remarkable pieces of art have been shown in more than 40 solo, and over 500 group shows, all around the world, including countries such as Switzerland, Japan, the United States, Mexico, Argentina, Chile, and Brazil.