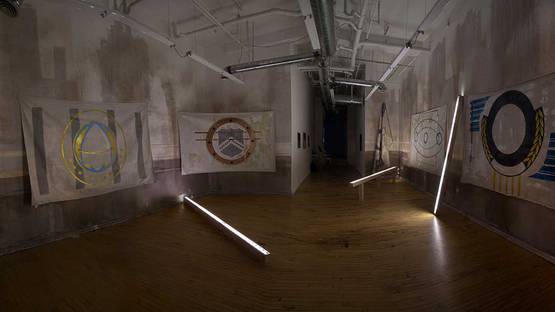 Using the personal experience and autobiographical themes, Rodrigo Valenzuela constructs narratives that indicate the tension between the individual and social communities. With gestures of detachment and displacement as the marks of the both aesthetic and subject of his work, the artist explores the way an image is inhabited, questioning the method of translation the objects and people into the spaces of artwork. Aiming to place an expressive but intimate contact between the realms of subjective and political occurrence, the artist creates the photographs and videos that are familiar and distant at the same time.

From Santiago to Seattle

Valenzuela was born in Santiago in 1982, where he earned his art history degree. When he moved to the United States, besides making art, he worked in a construction in order to support his passion for creative expression. After he finished his MFA at the University of Washington, he became a Core Fellow at Museum of Fine Arts in Huston. His work has been shown in numerous solo and group exhibitions, including the Frye Art Museum, Seattle, Museo de Arte Contemporaneo, Santiago and Steven Zevitas Gallery, Boston and been held in several public and private collections. Valenzuela is a recipient of Artist Trust’s Arts Innovator Award (2014), the Texas Contemporary Award (2104) and the University of California Institute for Research in the Arts grant (2013).

His large-scale installation Hedonic Reversal with three-channel video projection El Sisifo, make the wider context and move beyond his previous autobiographical projects, questioning the issues of class, race, and labor. Coming from the family of workers and being a worker himself, he strives to represent a larger statement about everyday life. The other installation, the Future Ruins, emerged as the response to the recent transformation of Seattle where the former modest apartments, cottages, and unpretentious buildings are being replaced by elite estates of the technological nouveau riches. The focus of his discussion is directed at those who construct and maintain those places, the workers whom he names the 13th Man, who often under the cover of darkness removes the trash left behind by the 12th Man.

In his later work, he moves beyond his previous autobiographical projects, questioning the issues of class, race, and labor

Questioning the Value of the Heroes

Seeing too many monuments erected to the wrong people makes him wonder why and how we honor people in the public sphere and encouraged him to create a project as a reaction to the lack of heroic figures in contemporary culture. Criticizing the idealization of fame and fortune, the artist questions the values of the neoliberal society that neglect the sacrifice of the unknown person in everyday life. Sin Heroes is deprived of the human figure in favor of geometric design in a form that resembles the altars. Engaging the viewer in questions concerning the ways in which the formation and experience of each work are situated—how they exist in and out of place, Valenzuela makes a social context that attracts increasing national attention.

The Artist is represented by the Lisabird Contemporary, Vienna.