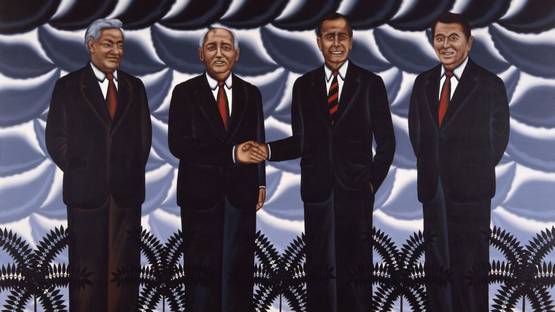 The American Roger Brown was an internationally acclaimed painter recognized for his authentic painterly style. By focusing on nocturnal cityscapes, silhouetted figures, and theatre facades and interiors, the artist developed authentic imagery rooted in social and political commentary characterized by the articulation of various themes spanning from disasters and religion, to queer desire.

Brown attended the American Academy of Art in Chicago and eventually enrolled at the School of the Art Institute of Chicago where he received Bachelor of Fine Art and later on his Master of Fine Art. The artist also received the Edward L. Ryerson Traveling Fellowship, which enabled him to travel throughout Europe and Egypt.

Alongside painting, Brown expressed himself through printmaking, as well as sculptures of found, assembled, and painted objects, theatre and opera sets, and mosaic murals. He exhibited continually and was represented by the Phyllis Kind Gallery in Chicago and New York, and was affiliated with the Chicago Imagist groups in the late 1960s and early 1970s.