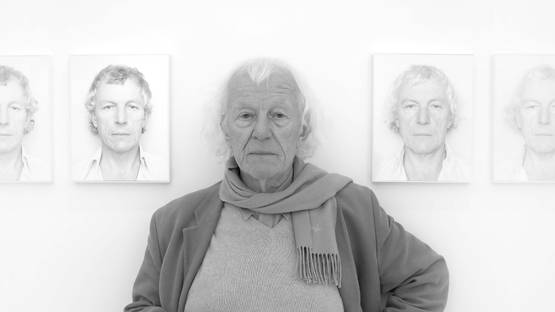 Behind every great deed, every act considered a true accomplishment, there is a long road paved with work, faith, and most of all dedication. Though they may begin with a mere thought, dedication can see even the most trivial of ideas to fruition. Portraying its effects within the world of art, Roman Opalka took dedication to a whole new level in his life-long work, working on a single piece of art for the bigger part of his life. Creating Details, as he would call them, Opalka painted a huge number of canvases that align into a single artwork striving towards mathematical infinity, one that the artist devotedly pursued.

The Journey of a Thousand Miles…

Roman Opalka was born in France in 1931 to Polish immigrant parents that sought to return to Poland in the upcoming years. With the coming of World War II, the family got to settle in Poland only in 1946 after the liberation of Germany by the United States army, and young Opalka took the chance to study lithography at a graphics school after which he enrolled in the School of Art and Design. It is said that “The journey of a thousand miles begins with a single step” and at the base of the stairs of his life-long artistic adventure laid no more than a simple idea. Waiting for his wife to arrive in a cafe in Warsaw, he envisioned the concept that would guide him for the rest of his career.

Opalka came to the idea of painting numbers on canvas; it may appear as simple as that and perhaps in a way it is, but the magnitude of this undertaking is what was to make it an important piece of conceptual art. Using a No. 0 brush, Opalka started painting the numbers in a line on a canvas that progressed sequentially until the canvas was filled, going over to the next one and starting where the previous one left off. Starting in 1965, the artist would daily work on recording the numbers with white paint against the black background of the canvas, or Details, as he liked to call them. Each of them measured the same, with the height of the canvas corresponding to the artist’s height (195 cm) and the width matching the girth of the door to his studio in Warsaw where the project had started (35 cm).

The form of each piece was the same: start at the top left corner of the canvas and progress in a line, ending at the bottom right. “Simple enough” is what most would probably think, were it not for the title of every Detail that embodies the purpose the artist had had. Naming each piece Opalka 1965/1 - ∞, he had intended to portray the list of numbers that stretches to infinity. Realizing that the time he has on this Earth is anything but infinite, Opalka thought of a way to reach notion in a different way.

In his quest for infinity, Roman Opalka painted a large number of Details

In order to embody the concept of endlessness that Opalka was pursuing on a daily basis, he added another element to his practice around 1968, some three years after the conception of the project. He had replaced the black background of the canvas with the tone of gray, seeing it as a less symbolic color and one void of emotion. Furthermore, in 1972, he slowly started adding white pigment to the canvas background in the early 1970s, progressively whitening the base of his Details as the number on them grew. Looking to grasp the infinity in his lifetime, Opalka expected to be painting white numbers on a white surface by the time he reached the number of 7,777,777. It happened sooner than he thought, and by 2008, he was already putting up white against white, passing the 5.5 million mark.

There was more to Roman Opalka’s “infinity chase” than the mere numbers he painted on the canvas. Though each of his Detail pieces is an indisputable gem of the contemporary conceptual art, it is their alignment and the higher purpose of each of the parts that make this whole single piece truly unique. Realizing the thought behind the meticulous physical work, Opalka stated that “It’s important that my last Detail should not be finished by me, but my life.” Passing away at the age of 79, Opalka entered the artistic history, claiming a unique place and, in a way, ownership over numbers.