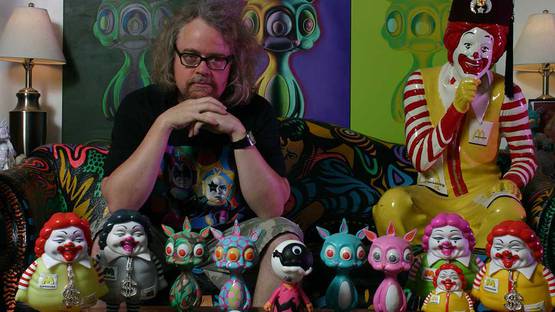 It is a long way from being a ghost painter to becoming an icon, whose work is widely recognizable and immensely popular. Ron English has experienced both extremes as he traveled down the same path that included working as an anonymous painter for other artists but also reaching the level of popularity and fame that is simply unbelievable. Sure, people today are a little bit loose when branding certain artists as icons and legends, but English is certainly one. His pieces are easily recognizable, inspiring to the others, and so influential that they actually made an impact on the 2008 American presidential elections.

The term POPaganda was coined to describe the artist’s constant mixing of the high and low art. He’s done pretty much everything when it comes to art – he is one of the founding fathers of street art and one of the forerunners of Pop Surrealism, he designs toys and sculptures, and he paints. One of his trademarks is the hijacking of advertising billboards and redoing them in the same style but with the characters of his own creation. The attention to details is very high and that is because of his past experiences as an art reproducer. When speaking of English’s inspirations, Picasso’s Guernica is at the top of the list, as well as the work of Keith Haring, Peter Saul, and Martin Wong. The approach of Gordon Matta-Clark, who placed a lot fewer restrictions on his process of creation, was also very influential for English.

The beginnings were frustrating for the artist when he worked as a ghost painter for other artists and was unaccredited. However, this type of work provided a lot of opportunities to improve the existing and learn new techniques. When he was younger, English began his now so characteristic hijacking of billboards, first in Texas, and he managed to re-do many of them before he was finally caught and charged with a 2nd-degree felony. Things have changed over the years, and even though the repainting billboards is still a felony, people now give him billboards, and he does them a favor by redoing them. The Dandy Warhols and Slash are some of the musicians English have done artworks for, and the level of fame reached new heights when he made an appearance on an episode of Simpsons, alongside Shepard Fairey, Robbie Conal, and Kenny Scharf.

What does it mean to be a street art legend? Is the secret simply in achieving fame and fortune, or is there more? When your pieces become so wide-spread, so popular and influential so they actually have an impact on presidential elections in the USA, that’s when you are a legend. Ron English has conquered the world of art with his flawless techniques and endless inspiration. He is one of the Godfathers of billboard art, which he became interested in as the writing on the billboard seemed to possess a level of authority which was greater than those on the walls. So he started painting his messages over the ads, advertising the truth.