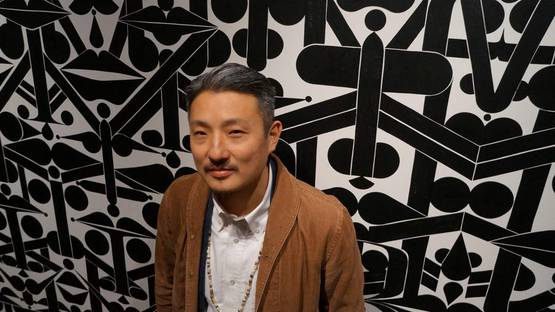 Romon Kimin Yang aka Rostarr is a multi-disciplinary artist, painter, calligrapher and filmmaker living and working in Brooklyn, New York. Born in South Korea in 1971, Rostarr moved to Washington DC when he was a child. He studied experimental graphic design and printmaking at the School of Visual Arts in New York City and graduated in 1993.

Early in his career he managed to produce work in both art and graphic design spheres, blurring the lines between the two. Rostarr has built a extensive oeuvre of abstract polymorphic paintings, totemic iconographic characters and mostly black and white calligraphic drawings. Always creating in a spontaneous manner, he is continually striving to find freedom within style, medium and form, and building upon the iconographic visual language he terms “Graphysics”, a word that exemplifies the geometric dynamism characteristic in his work. Since 1999 Rostarr has also been a core influential member of the group Barnstormers, a collective of approximately forty artists.

In 2000, he was named one of I.D. magazine’s “I.D. 40 under 30”, and recognized as an honoree at the 2004 A.I.C.P show held at the MOMA for his contribution to a celebrated Nike campaign. In February 2010, his forty minute motion painting film titled Kill The Ego was shown at the Pompidou Centre in Paris.

His artwork has been reviewed in Artforum, Modern Painters, The New York Times, The Village Voice, and Libération among other publications. Rostarr has had solo exhibitions in Tokyo, Paris, Milan, New York, Los Angeles, Miami, Puerto Rico, to name a few, and has participated in group shows on both a national and international level, also extensively as part of the esteemed Beautiful Losers show which has toured museums and contemporary art centers worldwide. His first book “Graphysics” was published in 2001 by Alife.