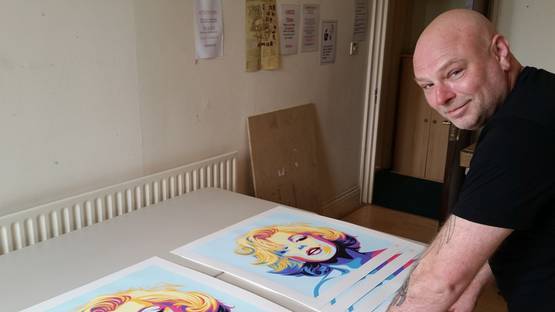 Craig Everett, aka Rourke Van Dal is a British artist who doesn’t accept any limits when it comes to creativity and imagination. The use of a wide range of techniques is the best proof of the experimental spirit that lies inside him. Rourke is known for creating urban and pop art, by using diverse styles and materials, including tin and cans, plastic, waste paper, and wood. His modern artworks depict landscapes, cultural icons, terraced streets, basically whatever he finds interesting and inspiring at the moment. Van Dal uses a variety of mediums like sculptures and prints to draw people’s attention or get them into art themselves.

He was born in 1969 in Bradford, England. As a result of the Industrial Revolution, this city was full of massive warehouses, fabrics, and buildings. These architectural giants and ‘concrete kingdom’ of West Yorkshire served Craig as a playground during his childhood in the 1970’s and 1980’s. This decade is also known for Punk Rock, Skins, Doc Martins and skateboards which have left a significant mark on Everett’s both professional and personal life. His first paintings were made after attending print and graphic design courses in the late 1980’s, which actually defined his career for the next 20 years, by working as a printer’s artist (graphic designer).

Rourke van Dal is a self-taught artist, who without any previous qualifications, followed his own path and built a unique style. Because of his eagerness for exploration, discoveries, and inventions, Craig has become one of the UK's most sought-after painters and is considered a true Artrepeneur. Whatever Everett creates, he does it in his own expressive way, by making a mark on everything he touches. Considering himself as a complicated person, Rourke says that art needs to be uncomplicated, different, and twisted. In 2008 Van Dal met Gavin Watson, a British photographer known for his Skins and Punks series that represent country's most iconic subcultures of the 1980s Britain. Rourke Van Dal used the candid black-and-white images from Watson’s The Wycombe Skins series as the basis for his famous portraits. One of the portraits is the homage to David Hockney, a man who contributed enormously to the Pop art movement of the 1960s. For this 3D occasion, Rourke used pieces and layers of newspapers cuttings, which he then stuck together and molded to create a sculpted effect.

Considering himself as a complicated person, Rourke says that art needs to be uncomplicated, different, and twisted

Distinctiveness of the Author

Craig is one of the members of the Urban Art Movement that gradually transformed from the underground subculture into the mainstream, and goes beyond it. The most recent artworks are depicting Van Dal’s Pop roots, including Elvis Presley, Superman, and Betty Boop. His Paintings, canvases, prints, and sketches have been displayed in a number of galleries and exhibitions in cities around the world like Tokyo, Los Angeles, London, and New York.
He is represented by 30Works Gallery in Cologne.

The artist lives and works in Thackley, Bradford, UK .