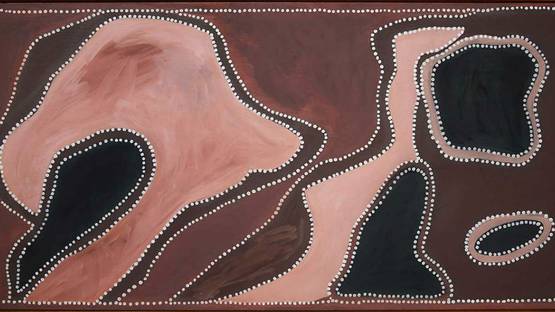 Being the central figure in the history of Aboriginal art, Rover Thomas was a cultural leader and establisher of the East Kimberley painting. His style includes the elements of his desert upbringing, as bird’s-eye perspective, map-like layouts and symbolic representations, painted in ochre tones derived from rock painting and body designs. Living on the Canning Stock Route, he spent first 40 years of his life working as a stockman. His artistic career began by accident, in his fifties. After the Cyclone Tracy devastated Darwin, Thomas had a powerful dream of providence that inspired him to create song and dance cycle, so-called Krill Krill ceremony that also includes the painting of boards with images of spirit beings and important sites.

Initially, Thomas was a desert man, strongly connected with his heritage and lifetime involved with the occasions at the Canning Stock Route. After his parents died, he was adopted by a drover and became a stockman himself. His family moved in different directions and some of them also became the artists. His remarkable life story reveals the great impact that the stock route had on the migration of Aboriginal families and, which is more interesting, the artistic movements that have emerged along that way.

In 1974, a major Cyclone Tracy caused the devastation and chaos in the Northern Territory. The Aboriginal people from Kimberly saw this disaster as a warning from the ancestral Rainbow Serpent, protector of the land, its people and source of all life, because of a rapid change and modernization of Indigenous tribes. Thomas experienced the providence, a dream that involved the spirit of his dead aunt who inspired him to create Krill Krill ceremony, a public performance which included songs and dances cycles associated with the painted boards.

From Stockman to Painter

At first, Thomas oversaw the production of the boards and around 1980 began to paint himself. This boards gave him the opportunity to represent the new images of the land, pushing the imagery into new subjects of the ceremony. Now, they refer to the style known as the East Kimberley. The original ones are made exclusively for the corroboree, the ritual dances, painted in earth pigments. They are characterized by an aerial perspective, in accordance with Central and Western desert art and by figurative and topographical elements. Since 1983, Thomas started to work for gallerist and art dealer Mary Macha who provided him with plywood boards.

Iconic Figure in the History of Aboriginal Art

Using the radical simplification of imagery, Thomas’ shapes are bordered by lines and dots and the painted surface resembles the body painting and rock art. However, more intuitive imagery and free expression distinguish his work over the most desert paintings that are composed of conventional symbols. Revealing his belief that both black and white people can live together, his paintings are abstract, but conceptual at the same time. Rover Thomas died on April 11, 1998, and was posthumously awarded an honorary doctorate from the University of Western Australia. He was one of two Aboriginal Australians whose work has been exhibited in the Venice Biennale in 1990. His oeuvre contains the paintings that provide the unique insight into the landscape of Kimberly region and human relations that marked the local occasions.