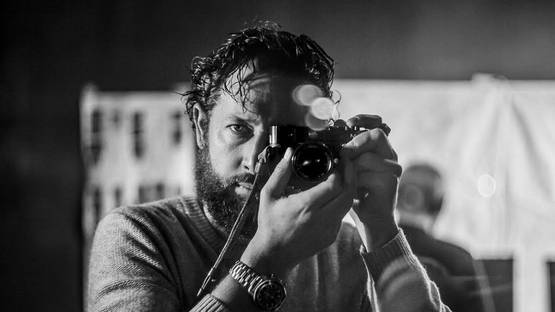 Ruediger Glatz is a German photographer, also known under the name Ruedi One, which he used for graffiti writing. Glatz was born in 1975 in Heidelberg, Germany. The artist, renowned for his black and white photographs, is one of the best known photographers of the graffiti scene. Once an active graffiti artist himself, he is famous for being the part of the movement and capturing the emotional side of illegal graffiti writing in his projects, such as Trains, Backflashes, The Face of Graffiti, and Tomorrow Aint Promised.

His other projects center around various topics, from Rottweiler dogs presented in the Very Good Dogs series, to the Blackforest in Germany, from his obsession with photos shown in Addicted To Click, to the redlight scene in Hamburg explored in the project Show.

Ruediger's body of work includes three books: Montana Writer Team published in 2006, 2009 Backflashes, and The Impossible Wardrobes with Tilda Swinton and Olivier Saillard, published by Rizzoli in 2015. While the first two books focus on the world of street art - in Montana Writer Team, he portrayed some of the famous graffiti writers, and in Backflashes he featured the photos of graffiti writing worldwide, The Impossible Wardrobes is a book about the project which comprised three fashion exhibitions and performances, carried out by the actress Tilda Swinton and Olivier Saillard.

Glatz exhibited extensively both in solo and group shows, locally and internationally. The countries where he exhibited include the United States, Switzerland, the Netherlands, the United Kingdom and Greece. His most recent exhibition has been Confrontation – Dark Thoughts and Moments of Light, presented to the visitors of the Golden Hands Gallery in Hamburg, Germany, in 2015.