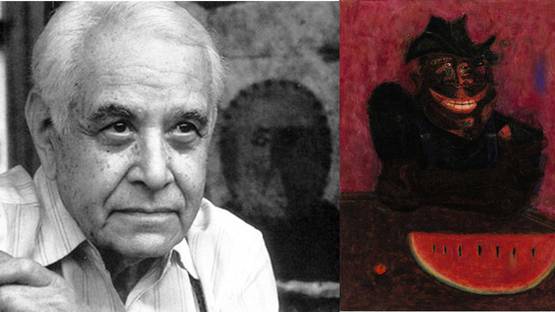 Rufino Tamayo was a painter, sculptor and printmaker, born in 1899 in Oaxaca, Mexico. After the death of his parents he moved to Mexico City with an aunt. In his early years, he worked in the family business but developed a passion for art after his aunt enrolled him in art classes. Tamayo began studying art at Escuela Nacional de Artes Plasticas in San Carlos in 1917. During his time there, he was influenced by Impressionism, Cubism, and Fauvism. Due to dissatisfaction with his studies, Tamayo left school and went to work for Jose Vasconcelos at the Department of Ethnographic Drawings in 1921. He was eventually promoted to the head of his department.

Tamayo’s artwork frequently profiles images associated with the Zapotec heritage. One of his most notable paintings, Children Playing With Fire, was painted in 1947 during the time of Mexican revolt. This piece shows two people being burned by a fire they created to symbolize the people of Mexico being hurt by their own decisions.

Between the years of 1925 and 1991, Tamayo produced a number of graphic art pieces that consisted of etchings, lithographs, woodcuts, and Mixografia prints. Mixografia was the name given to an art technique created by Tamayo and a fellow Mexican painter that combined prints with three-dimensional textures.

In 1935, Tamayo joined the Liga de Escritores y Artistas Revolucionarios (LEAR). This was a place where artists could use their paintings and other artworks to express their feelings about the Mexican Revolutionary War and other issues concerning the Mexican government. Along with four other artists, Tamayo was chosen to represent his art in the first American Artists’ Congress in New York. Throughout his career, he also became known for painting murals and images of women. He created a number of paintings that portrayed images of his wife Olga, including the Rufino and Olga piece that he painted in 1934.

Tamayo exhibited his paintings at the Venice Biennale in 1950, and the success of his work there led to international recognition. He went on to design murals for the National Palace of Fine Arts in Mexico City, Birth of Nationality and Mexico Today, both 1952–53, and for UNESCO in Paris, Prometheus Bringing Fire to Man, 1958. Tamayo was a prolific printmaker, and he also experimented with bronze and iron sculpture.

In 1981, the Tamayo Contemporary Art Museum opened in Mexico City. Tamayo’s work has been exhibited worldwide in museums including the Solomon R. Guggenheim Museum in New York, the Naples Museum of Art in Naples, FL, The Museo Nacional Centro de Arte Reina Sofia in Madrid, Spain, and the Phillips Collection in Washington.