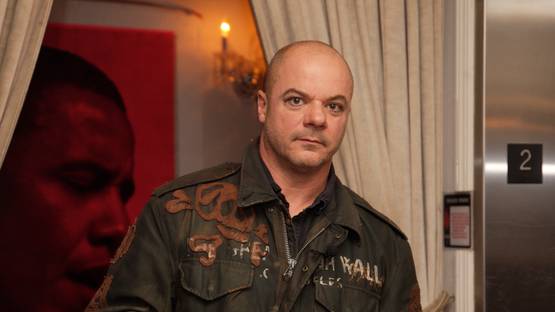 Russell Young  is a British artist born on March 13, 1959 in Northern England to an unwed mother. His first months he spent in foster care, and in nunnery and was adopted by Ken and Lesley Young when he was four months old. Since his early age he was drawn to an idea of the American dream. For him everything American he came in contact with represented freedom. He hated school and often skipped school entirely. He escaped to the football terraces with his father. He loved the chants and tough terrace culture. As many northern youths, he was born ripe into the Sex Pistols, Joy Division, New Order and the northern soul of the Wigan Casino.

He studied photography, film and graphic design under Jack Straw, at the Chester Art College. At that time his parents divorced. He continued on to Exeter Art College and to London where he couldn’t find a job. After months on the streets he began assisting photographer, Christos Raftopoulos, who took him under his wing and taught him to see a new world of light and sharp detail. Raftopoulos pushed Young to take on projects of his own. He started at the live club shows of Bauhaus, R.E.M. and the Smiths. The photographs were exquisite and he quickly picked up work for magazines and eventually began sessions for the record companies. In 1986, he shot the Faith sleeve for George Michael, launching him towards America and opportunity. He did portraits of Morrissey, Bjork, Springsteen, Dylan, New Order, Diana Ross, Paul Newman and many other celebrities. In 1992, Young moved to Hollywood. He met Finola Hughes, they married and life took shape for him in America. His career as a photographer and music video director was flourishing. He carved out the time and began to paint seriously. Young and Hughes moved to New York, where he’d eventually grown frustrated by the limits of the photograph and the commercial world around it. Hughes was seven months pregnant with their first son. He felt frozen and dead as a creative person, and decided to go to Tuscany to meditate on becoming an artist. Young returned to New York and rented a studio in Brooklyn and began a series of experiments he called, Combine Paintings. He also started what he believed were clearly extensions of photography. He begins his series of Pig Portraits. Young had spent his photographic career doing portraits of celebrities. He never felt he’d captured his subject as true and as powerfully as these new works. The answers to the questions he had of himself were in fact playing out in the Pig Portraits. They attacked the nature of photography, portraiture and prickly nature of celebrity itself. In 2003 he showed his first series of Pig Portraits in Los Angeles. The family moved back to California and built a house on the coast, 80 miles north of Los Angeles. Young built a studio on the compound and began working alone, focusing on the development of ideas and flying east to New York to work with his master printer and team. In 2007, he showed his Fame + Shame paintings in London. They were an exorcism, a gritty, bare ‘pop-art cocktail’ of America, seen through the eyes of the young man from the north of England, leading one through the glamour and glory to brutal chaos and brooding. Young began to use diamond dust in 2007, pressing the crystals into the enamel of the paintings. He hung the paintings from the trees of his California garden. In the monochrome paintings we recognize Marilyn Crying and Kurt Cobain. He called them Dirty Pretty Things. In 2009 he began the American Envy paintings, revisiting some of his most iconic social signifiers. Elvis, JFK and Charles Manson are the chaperons.

In February 2010, Young was admitted to the Cottage Hospital in Santa Barbara, California and diagnosed with the H1N1 virus, the Swine Flu. Young endured an 8-day induced coma with doctors and loved ones skeptical of recovery. After a lengthy stay in hospital, Young emerged from his near-death experience with severe memory loss and an incredibly weak body. Little by little, he built back his strength and began examining his life and his surroundings in a whole new way. He says, “I left the hospital and I had to learn to breath, write, draw, think, and walk for the second time in my life.” During this process of recovery, Young began to explore the nature of trauma and its effect on both the individual and cultural psyche. 2011 forced a seminal shift in his work. He began to work free from the domestication of art, like a feral boy, filled with a new, rough energy of violence, sex and power. From this two new series emerged. First, Helter Skelter paintings and next, Isolation series.

Young continues to challenge and reinvent himself using bold, forceful checks and assaults on his own systems to find new ways of expression. He uses themes, still with him from boyhood, to express feelings of isolation, alienation, entrapment and the marginalized dreams of an outsider fighting for a way into the light and expression. His work has been shown in London, Paris, Berlin, Tokyo, Singapore, New York, Detroit, Miami and Los Angeles.

Russell Young lives and works on the California coast and in Brooklyn, New York.