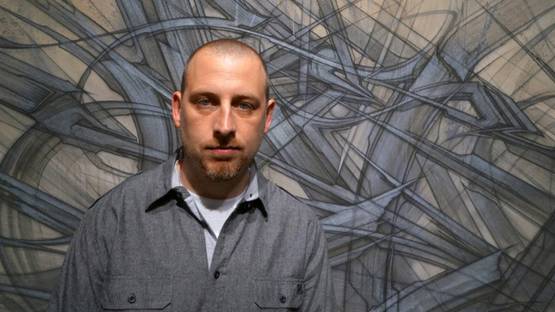 Ryan Weston Shook, known as Saber is an American fine artist, coming from a graffiti background. In 1997. when he was only 21, he created the world’s largest graffiti piece, nearly the size of a football field, on the bank of the LA River. It took him 35 nights to complete this work, and it definitely paid off since it was documented by satellites in space. Over the years, the artist has dedicated his work to helping bring public awareness to the true art form of graffiti, which often involved dangerous work, as graffiti artist don’t know for safety nets while painting in a dead of night. A whole generation of artists and graphic designers was influenced by Saber, as he became an influential part of the modern entertainment, social media, and art involved in social reform.

Relax, It's Just a Graffiti Rebellion

Fired up by a sense of social injustice, the artist put all of his artistic energy into high-profile political activism. Furious about the US health system, the artist released a video of him painting graffiti over painted flag of the USA in an attempt to emphasize the injustice of the system, in 2010. This brought him criticism from the US right and Fox News. In 2011, after some cuts to the arts and a new law censoring public murals, Saber commissioned light aircraft slogans across the LA and New York, causing an utter sensation. This artist is not afraid to change the system with his art, and he continually shows that.

Besides the heroic aspect of his art, there is the commercial one, and it is no secret. Saber believes that an average person should be able to call his painting beautiful, even if they know nothing about graffiti. This is one of the most important things for the artist. It seems that this wish of his has gotten true since his pieces can be found in both galleries and private collections around the world. No matter the motive or the subject of his art, Saber never stops generating public conversations about the boundaries of art, all the while moving them further away.

From Street to Gallery

Saber was born in Glendale, a suburb of Los Angeles, raised by very creative parents, a circumstance which helped him discover his passion for art at an early age. After seeing the spray paint-covered Belmont Tunnel, with his cousins, there was no turning back from his life path of an artist. He first worked solo, working on his skills, before he joined MSK, and later he was introduced into legendary piecing crew AWR. In 2002, he began exhibiting in his fine art. This artistic output included surreal cityscapes and detailed “new reality” canvases. Saber is no stranger to corporate projects with Scion, Montana Paint Company, Hyundai and much more. Saber continues to make his vibrant, enticing, and so often political paintings, right from his home in Los Angeles, where he lives with his wife and two young children.
He is represented by Allouche Gallery.

The artist lives and works in Los Angeles, California.