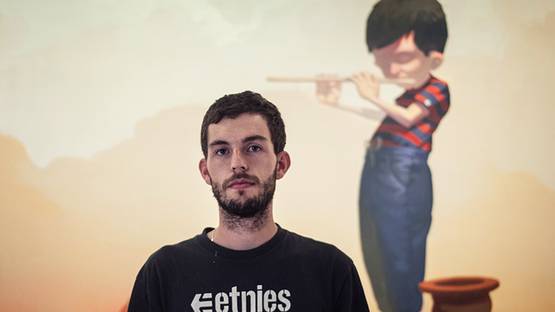 Przemek Blejzyk – a.k.a. Sainer – is a Polish artist, best known for being a member of Etam Crew. Like in a duo with Betz, he amazes in his solo work with his colorful, whimsical figures, which he paints both on canvasses and the streets. There’s a darker edge to his style –none of his characters look at you – or their faces are hidden in some way, almost as if they are hiding their sadness…

Sainer, man of graffiti and a football

He was born and grew up in the early ‘90s in Lodz. As far as he can remember, it was not so easy to get toys and things from the shops. Instead, his friends and him would spend whole days just wandering around. They would invent games and create toys from anything that they could find. It was definitely more creative than the way kids are spending their free time nowadays, Sainer says. His nickname was Sain at first, until a friend once called him Sainer. So, now it’s Sainer.
Art has been Sainer’s strongest passion since he started painting; he was 16. At the time, Sainer was a big fan of hip hop culture, and wanted to be part of it – to meet painters and musicians with some kind of authority.
“I first started doing graffiti as a hobby, mainly focusing on characters and sketches with letters. Back then, I was more into practicing football, and didn’t take art seriously. Unfortunately, I injured my knees and had to resign from football. I started to dedicate all my free time to drawing characters and portraits, and finally decided to take exams to go to the Fine Arts Academy. So, I guess ‘street art’ is just a word to me, my passion to paint is more important.”

On the Academy, he met Betz and the two of them have been doing walls together since then. Mostly, Sainer paint people, and Bezt focuses on animals. They always have a big brainstorm before working on a wall together and just go from there.
In contrast, they work on canvases alone.
“It’s better to work individually sometimes, and to compare experiences after you get them on a canvas. Then, we can translate those experiences to a wall.”
Bezt and Sainer are both successful commercial artists and freelance designers, but its their graffiti culture that have taken Europe by storm. Today, they split their time between traveling around Europe together to paint murals at a variety of street art festivals and producing their individual work and exhibiting solo shows.

Sainer works with a variety of media, but we’re particularly thrilled by his urban creations, large and small. His realistic portrait style has a surrealistic twist that is indisputably his own. “I think it’s a natural process to start with something new, and to keep adding elements until you’ve created your own style. For me, it’s a natural transition. There’s no big philosophy behind my work. I like to take things that I maybe saw on the street, in a movie or some other place, and I just make it more surreal; make it my own.”
The typical wall mural takes him around 6-7 days, and he is using spray paint, acrylics, rollers, brushes and lifts. But amidst the melancholy, Sainer mixes in a touch of humor, allowing for a poignant emotional experience for the eyes and mind.
“I always wanted to create freaky characters like the ones I saw in cartoons when I was younger. I guess I just wanted to make my own. Then, at art school I started practicing classical portraits. As I painted more and more, I realized that I wanted to focus on people and portraits.”
Sainer lives in Lodz, Poland.