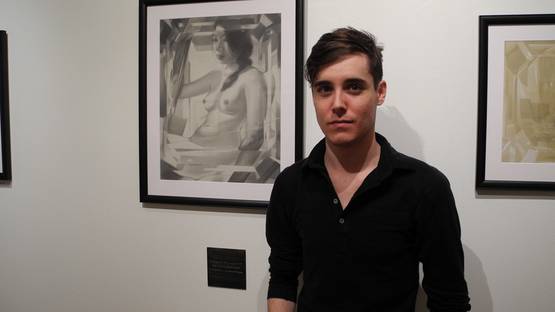 Sam Wolfe Connelly is a New York-based artist, known for his paintings and illustrations that are vivid renditions of the unknown, placed into surreal yet oddly familiar domestic settings occupied by haunting figures.

Connelly was born in 1988, and raised in Northern Virginia. He became fascinated with drawing, his obsessions with nature, the world around him and things that remained unseen. This led him to pursue a degree in Illustration at the Savannah College of Art and Design in Georgia, where he graduated in 2011.

He was not yet out of school when he started receiving his first commissions, and has been on the radar as an up and coming young illustrator. His clients include Playboy Magazine, Hasbro, Night Shade Books, Plan Adviser Magazine, Evil Ink Comics, Virginia Living Magazine, Bitch Magazine, Bay State Parent, Eugene Weekly, Educational Leadership, Colors Magazine and Coheed & Cambria.

Sam Wolfe Connelly’s work utilizes a delicate lines, subdued textures and controlled colors. Each of his illustrations express a sinister poeticism that is arranged within a warm and dimly lit domestic setting. Through his use of graphite, Connelly evokes such a hushed tension that renders darkness in a way that leaves only a slightest hint of what lurks within. He enjoys drawing strangers on the subway and depicting haunted houses. Drawing from scenes of his childhood, he brings the spooks and mysteries of the inhabited world into his illustrations. As the artist himself states, ‘I really miss being scared of the unknown as a kid. That’s something you can’t get back as an adult where in everything there’s an answer.’

Connelly’s subjects are ghosts, death, eerie creatures, the unknown - all rendered in his highly polished graphite to digital style. His characteristic style channels a gothic Americana reminiscent of David Lynch or Charles Burns, creating a mysterious voyeuristic mood through his mastery of light and shade. His vignettes, while powerfully dramatic, convey a slowly unfolding narrative that neither describes a beginning or end – we have entered in the middle of the story. Scenes illuminated with a sinister orange and yellow glow, as if by the light of a fire, allude to an unknown cliffhanger, evoking the haunting feeling of dark doings and beauty in the midst of abject horror.

His solo exhibitions include Nocturne at the Roq La Rue Gallery, Seattle, and Semiprecious at the Hashimoto Contemporary, San Francisco, both held in 2013. His work has also been featured in several group exhibitions.

Sam Wolfe Connelly is currently based in New York.