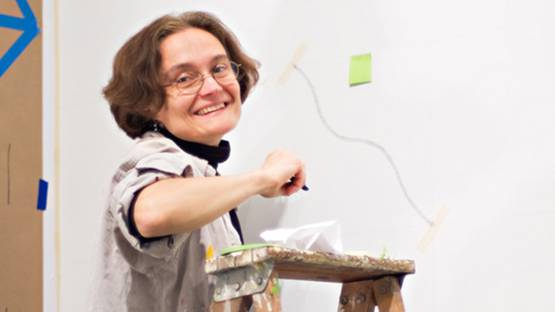 Sanda Iliescu is a visual artist and professor at the University of Virginia. Iliescu practice and teaches painting, drawing, collage and design. Through her teaching, she seeks to deepen the dialogue between the University and the broader community. Outside of the studio, she makes murals and installations, some of them with her students.

Iliescu was born in Romania in 1959. She received her BSE in Civil Engineering and M.Arch in Architecture, both from Princeton University. Her work has received numerous awards such as the The Rome Prize, a McDowell fellowship in painting and The Distinguished Artist Award of the New Jersey State Council of the Arts. Carmen Bambach, Curator of Drawings and Prints at the Metropolitan Museum of Art, and Paul Barolsky, Commonwealth Professor of Art History at the University of Virginia, have written critical essays on Iliescu’s artwork.

Her work has been exhibited at the Art Verge Art Fair, Miami (2009) and the Bridge Art Fair, Berlin (2008).  Her book The Hand and the Soul: Aesthetics and Ethics in Architecture and Art was published by the University of Virginia Press in 2009. Other publications include “The Garden as Collage” (Studies in the History of Gardens and Landscape Design, 2007), “Beyond Cut-And-Paste” (Places: Forum of Design for the Public Realm, 2008), and “Laocoön” (City Secrets: Rome, Robert Kahn, editor, 2011).