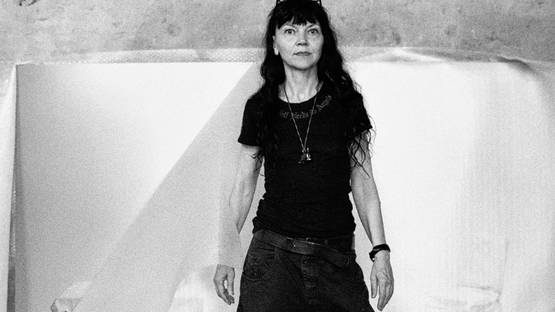 Sandra Kunz is a Swiss contemporary artist, active in the fields of sculpture, installation, and photography. Kunz was born in 1960 in Reinach, BL in Switzerland, where she graduated as a Master of Advanced Studies in Art, Design and Innovation in 2005, at the FHBB in Basel, Switzerland. Kunz also got her Master of Fine Arts in 2010, at the same university in Basel. Interested in Eastern culture, Kunz has lived for a period of time in Xiamen, China, which caused her art to be imbued by the Chinese influences. Since 2010, Sandra Kunz also works partially in Mulhouse, France.

The Container is a project Sandra Kunz did in a collaboration with a Chinese artist Yang Jian, in 2008. The project represents an installation of inflatable soft plastic creation, created with an idea to display an enormous prototype of a cultural fusion of features, aesthetics and cultural heritage belonging to each of the indigenous cultures of China and Switzerland, or in a wider context – of the East and West.
The Container efforts to bridge the gap of intercultural boundaries, and also to embrace questions and paradox of form and content as well as parody transcultural miscommunication which exists in between different cultures. As an inflatable hybrid, The Container is metaphorical in nature, drawn from a direct parallel to thought patterns which are created and engendered by educational prototypes, media diffusion, and a mass unconsciousness. Paradoxically at the same time ephemeral and physical, this work is both temporary and permanent.
This piece attempts to authentically replicate architectural characteristics which are inherent in each of the native cultures of the two collaborating artists. Greater detail is found in the secondary architectural features, and the artists’ intention was to equally enact upon audio and spatial perception. The key construct is derived from the architectural style unique only to the South-East of China. The visual display of The Container references to this atypical phenomena - the structure is identifiably Chinese yet remains outside the predominant, most commonly depicted architectural styles of the mainland - China.

The common feature in Sandra Kunz’s installation and sculpture pieces is the coexistence - search of a second skin that makes the connection between inside and outside, between two distant figures, or to an object, which then becomes a prosthesis to the object itself. A large number of these works are presented in a book entitled White Goldfish, published in 2015.

“The second skin, a haven and shelter when everything around about is in motion. I also describe… closed system. In this respect it contains both refuge and imprisonment within oneself. I think my artistic work is continually initiated by the ambivalent tension between different poles. It’s also a part of my own self between Here and There” – an excerpt from White Goldfish book, by Sandra Kunz.

The book was first presented at the retrospective show of Kunz’s works created in the period of 2007 to 2014, at Licht Feld Gallery in Basel. This show, held in 2015 was the first solo exhibition of Sandra Kunz’s art in her native Switzerland. Apart from this solo show, Kunz has exhibited her art in various projects, festivals and group and solo exhibitions in China, France and the Netherlands.