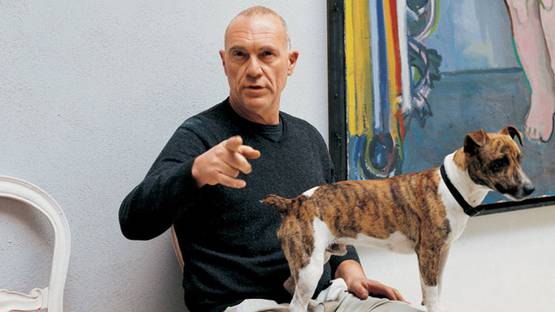 Sandro Chia is an Italian artist, a member of the Italian Transavanguardia movement in the 1970s and 1980s, best known for his Neo-Expressionist paintings and sculptures, in which he contemplates the figural through dynamic compositions and bold use of line and color.

Born in 1946 in Florence, Italy, he has studied at the Istituto d’Arte and then at the Accademia di Belle Arti in Florence where he graduated in 1969. After graduation, Chia traveled to India, Turkey, and throughout Europe, before moving to Rome in 1970, where he fully developed his expressionistic formal style, gradually moving away from conceptual works towards a more figurative style of painting. He began exhibiting his work in 1971, a year after moving to Rome, later referring to his early productions as ‘mythical conceptual art’. After a residency in Germany, he went to New York and held his first US exhibition at the Sperone Westwater Gallery. The following year he moved to New York City, where he will remain for over two decades, with frequent trips back to Montalcino, near Siena in Italy.

A painter, draughtsman, printmaker and sculptor, Chia’s pictorial language is colorful and eclectic, and explores earlier art movements, including Italian Mannerism, Cubism, Futurism, and Fauvism, aiming to connect the present and the past. His motifs stem from antique and Christian mythologies, and are sometimes understood as a humorous, flippant commentary on religious writings. Typically capturing his subjects in moments of movement, his works convey a sense of drama and heightened emotion, with his vivid palette and energetic brushstrokes echoing the exaggerated expressions of his figures. Often making reference to Italy's history and culture in his works, he has employed traditional mediums such as bronze sculpture, mural painting, and mosaic.

In the late 1970s he established himself as a major artist of the movement in Italian figurative painting known as the Transavanguardia. In large, vibrantly colored oil paintings such as In Strange and gloomy Waters a White Spot Shines, a Little Girl Flies by my Side he celebrated man’s sensuality, animal vitality and closeness to the natural world. Cultural and specifically art-historical references abound, with a swirling, rhythmic application of paint in themes of eroticism, melancholy and death. In Water Bearer and related paintings, larger-than-life, heroic male figures imbued with an enigmatic sense of mission are Chia’s main protagonists as manifestations of his own identity; he explored similar imagery not only in drawings and prints but also in sculptures cast in bronze and sometimes exuberantly painted in vivid colors, as in Man with Ram.

Chia's work has been exhibited extensively at institutions worldwide, including the Stedelijk Museum in Amsterdam, the Metropolitan Museum of Art, the Museo Rufino Tamayo in Mexico City, and the Nationalgalerie in Berlin. Chia took part at documenta 7 in Kassel in 1980, and most recently, his work has been shown at the Tate Modern in London, and at the Venice Biennale.

Today he lives between Miami, Rome and his Castello Romitorio wine-making estate in Montalcino, where he owns a vineyard, and personally designs the labels for the wines produced.