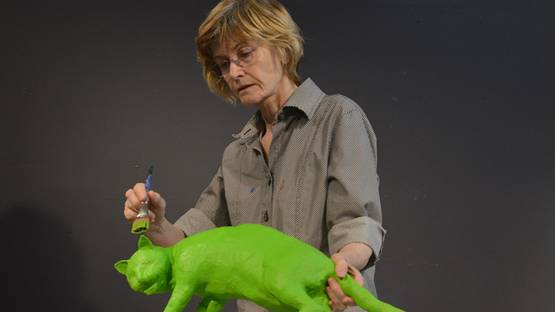 Portraying her own feelings through photographs and three-dimensional sets or tableaux, Sandy Skoglund explores people’s subconscious fears creating the installations that question the perception of reality. Her large-format photos captivate with their bright colors and, at the first glance, amusing content, but a deeper look reveals the hidden essence of underlying treat which plays into people’s fears. Demonstrating a great ability to oppose reality to imagination, the origin of her interest lies in the mixture of natural and artificial. Decades before Photoshop became widely used, Skoglund started creating fascinating photographs by building incredible and carefully prepared scenography characterized by bright, contrasting tones and monochromatic color scheme.

Education and the Working Process

Skoglund was born in 1946 in Quincy, Massachusetts, and she remembered her childhood for frequent relocations until they settled in California near Disney World. She has always asserted this change of environment as a positive influence on her artistic development: “There is probably kind of a California sensibility in my work in term of color”. During her studies of Art History and Studio art at Smith College in North Hampton, Massachusetts, she had a wish to become a fashion designer or cartoonist. Spending one year at the Sorbonne and Ecole du Louvre in Paris through her college study abroad program where she discovered the power of theatrical images through avant-garde movies, Skoglund returned to the United States and went to graduate school at the University of Iowa, where she has studied filmmaking, multimedia art, and printmaking. The artist rounded her education with the degree of Master of Arts and Master of Fine Arts in painting.

Starting to create as a conceptual artist in New York in 1972, Skoglund became interested in photography, but only as a mean of documentation of her artistic efforts and experimentations with the themes of repetitions using the techniques of mark-making and photocopying. In 1979, she produced a series of repetitious still life images with food items arrangement, but her probably the best-known piece is Radioactive Cats (1990) where fluorescently green painted clay cats running madly in the gray kitchen while old man sits at the table and his wife looks into the refrigerator. Her creative process involves designing of the staged environments that range in color and materials, often followed by live models like in the Cocktail Party (1992) and Revenge of the Goldfish (1981). Sometimes spending months or even whole year planning the installation, Skoglund takes photographs and then destroys the tableau. The photo is the final result and it differs from the installation that is deprived of human presence. “My work is based on a Frankenstein model where the human beings have created the world that is out of control and turns on them”.

Photographs are the final result of her complex creative process

The background of her approach is also very complex and important part of the creation. Looking for the perfect subject, she always carries a notebook where she writes down all of her thoughts and observations. Her tableau technique allows her to transfer three-dimensional object into plain, two-dimensional images, making sculpted scenes to look like surrealistic pictures. “I try to suggest things. I want to create possibilities of interpretation,” – and she succeeded in that intention, offering the endless possibilities of interpretation. Using the artificial, monochrome colors, the artist emphasizes the unreality of shown but also takes care of the symbolism where, for example, the blue opposed to orange are associated with life and death. Among her famous artworks is Shimmering Madness (1998), where her characters have their heads turned backward from their bodies and everything is covered with the jelly-beans. This composition differs from her previous for its unusual setting which is far away from earlier mundane environments.

Skoglund started her teaching career during the 70’s when she worked as an art professor at the University of Hartford and currently is on the position of photography and installation/multimedia teacher at Rutgers-Newark University in New Jersey. Her works have been exhibited in numerous solo and group shows worldwide and have been held in several museum collections including the Museum of Contemporary Photography, San Francisco Museum of Modern Art and Dayton Art Institute. During the more than forty years of her career, this American artist strives to explore social and political issues through her unique technique and sincere expression of her feelings.

Featured image: Sandy Skoglund - Artist's portrait - Image via blog.colorstudio.com
All other images copyright of the artist