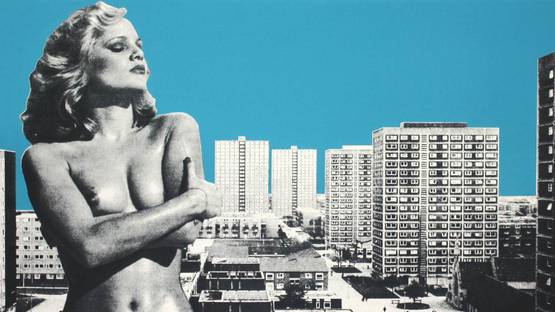 Sarah Hardacre makes collages and prints featuring city landscapes and women cut out from vintage magazines. She gives a new role to women when she puts them into 20th-century modernism architecture. Not so typically feminist, her art is more than just a shout out for women's rights or a gentrifications issue. Sarah tries to imagine what would the world look like today if women had more power during the 50's, and how would the city look like if women were given an opportunity to voice out their opinion. There is a special thing about her collages that can not be overlooked, it is how to curvaceous body of a woman looks like in comparison to robust, edgy and rough buildings and skyscrapers.

Vintage Appeal and Closeness to Reality

Hardacre raises the question of proportion, and she wonders how we choose to surround ourselves with cubes and rectangles, where the symbol of life - woman's body, is round, soft and voluptuous. The reason she chooses vintage publications and retro issues of men entertainment magazines lies in the fact photographs were not so much retouched as they are now. There was no contouring of the face and body, no fake tanning and no Photoshop like there is now. Of course, the artist is aware beauty lies in the eye of the beholder, but beauty standards don't and they are almost always dictated by the ones who set the rules of commerce and advertising. It is the same for architecture.

Sarah works in her hometown, Salford and in Machester and she uses urban landscape photos, from the government build houses that someone, on the hierarchically highest position, gave command to build, and tries to emphasize the opposing natures of the woman presented in her collage and the woman who actually lived one of the houses. Sexual revolution and women's rights are the background for her work, but the context is very subtle because the artist has no intention to be very blatant about it. Huge blocks of buildings were united into communities and there was a group leadership that governed, but the promise for the better future was not given to the second group that governed and sustained the households - women were in the kitchen and in magazines. Sarah put them up front.

Hardacre stresses out the women's changing role in society

Stepping out and Taking Control

As the times have changed, so have the rights of women, and Hardacre stresses out the women's changing role in society. The artist had many exhibitions worldwide, and her work can be seen in the collections of The British Museum and the British Council. She started Art Yarn with artist Rachel Elwell, where they used the hype of yarn bombing to help people learn new skills and develop new creative hobbies. In her modern-retro collages, there sits gorgeous woman seductively smiling next to the automating block of concrete. She is taking control and stepping out of the house into the world where she can have and impact and participate.

The artist is represented by Gregg Shienbaum Fine Art gallery.

All images used for illustrative purpose only © Sarah Hardacre