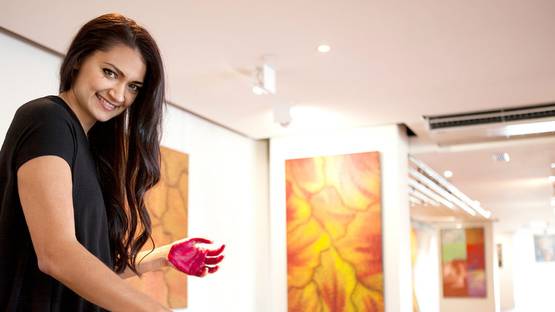 Considered as one of Australia’s young rising star, Sarrita King creates the paintings that represent the homage to the first generation of Aboriginal artists who paved the way for their inheritors. Using the old Aboriginal techniques of dotting, she makes the unique mixture of tradition, self-developed methods and unusual procedures learned from her father, well-known painter. She is a part of a new generation of artists who have been influenced by both their Indigenous heritage and modern upbringing and who connect the past, present and the future. Her paintings evoke the energetic interpretations of Australian rough weather and landscape, inspired by the life in the Northern Territory.

King inherited her Aboriginality from her father, William King Jungala who originate from a Gurindji tribe. These people became known during the 1960’s and 1970’s when the members of their group working at Wave Hill cattle station led a landmark case, the first successful case of that kind in Australia. It is the same self-confidence and individuality that she embodies in her work. Growing up in artistic family, in Darwin at the north, King has been in a close relationship with her roots. Being exposed to the rough climate conditions and adequate landscape, her surrounding provided the themes and inspiration for her paintings.

Her surrounding provided the themes and inspiration for her paintings

Reflecting the Energy of Land

Speaking the earth language, she depicts the main elements of life, fire, water, desert, rain and other factors that shaped her creative expression. Her canvases disclose the energy of light and fire trough the universal aesthetic language that allows the viewer to experience the power and pure beauty of the Australian landscape. Depicting the scenes from the Dreamtime stories, she skillfully handles with the colors of nature. Her interesting aesthetic showing a perfect balance between the Indigenous tradition and contemporary painting.

Spirit of Universality and Success

Spending her childhood in Darwin, she developed special relationship with her Aboriginality that marked her artistic work from early beginnings at the age of sixteen. Now, Sarrita King lives in Adelaide, where she shares the studio with her sister Tarisse King, also a painter. Two artists have been exhibited together in numerous shows. Sarita King’s work is also a part of international art collections and it has a great success on auctions. Playing a netball at a state level and studying journalism at the Univeristy of South Australia, she has many interests and achievements but her art remained her favorite way of communication that enables her to keep her ancestral narrative alive.