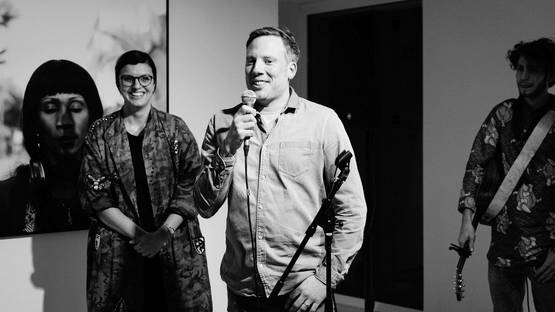 Sascha Kraus is a German photographer, famous for amazing portraits of figures that include politicians, former child soldiers, prisoners and others. As a fan of rap music, he tries to combine it with photography in order to send a message and make the viewers think about their actions and possible changes that they can make. As the central theme of his art is people, it is not strange that his mission is to indicate and be active about inequality and social shortcomings. He focuses on the use of traditional tools and processes, as a way of expressing his creativity. His photographs are made all over the world capturing the endless struggle between humans and their desire for survival.

The photographer was born in 1979 in Essen, Germany. In 1999 he started to work as a freelance photography assistant in Dusseldorf. Between 2000 and 2006 Sascha attended Photography Studies at the University of Applied Science in Dortmund. In order to still use analog ways of production, Kraus removes the gap that lies among traditional and more innovative approaches, thus creating contemporary pieces which carry a note of conservative elements. What is always visible in his books or publications is the high quality of photos which he makes, alongside the high standards of printing.

Kraus removes the gap that lies among traditional and more innovative approaches, thus creating contemporary pieces which carry a note of conservative elements

In a period of six years, the artist has visited 13 countries and took hundreds of photos of 43 artists from the rap music industry. This project called FORTHRIGHT – Stronger than a weapon is a book consisted of 444 pages, including more than 250 portraits and were snapshots taken in various parts of the world, especially in the countries with an authoritarian government. The goal is to use rap music as the medium that in some cases can make a positive impact on politics and military regimes. In this case, people enforce the power of words to fight the systems and other problems that exist within them. This genre is perceived as a tool in a fight against repression. The applied approach is direct and straightforward. Besides photographs, there are also interviews with all portrayed artists, as well as a double vinyl with selected songs included in this book.

Sascha’s another project called Sichtwechsel is a part of the permanent exhibition at the Ruhr Museum Essen. His work has won the award in Book Documentary at TIFA, Tokyo in 2016, and he also got the award in Excellent Arts at DDC GUTE GESTALTUNG 17 in Frankfurt. His art has been displayed in galleries and museums in cities like Hamburg, Bochum, Hamm, and in other places.
The artist is represented by the Galerie Droste, Wuppertal.

He lives and works in Essen.

Featured image: Sascha Kraus during his exhibition
All images courtesy of Galerie Droste and the artist