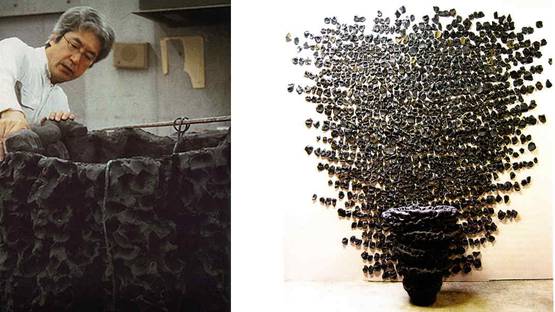 Satoru Hoshino is a Japanese artist whose oeuvre includes large-scale installations that can fill entire rooms as well as more intimate objects that can be held in one’s hands. The hand is a visible and prominent element in his works, and when he uses glazes, he allows them to pool and drip rhythmically on the interior and exterior of the works. It is precisely this purposeful engagement of the hand and the material that makes the sculpture appealing, as the artist allows the process of forming and glazing to be his subject.

Satoru Hoshino was born in 1945 in the Niigata Prefecture, Japan and graduated from Ritsumeikan University in 1971. He experienced a turning point in his artistic practice in 1986, when a landslide destroyed his studio. While he had been working in clay for nearly 15 years before the devastation, this event changed his approach towards the medium. Arata Tani described Hoshino’s position regarding clay for Ceramics: Art and Perceptionwhen he wrote, “it is essential to understand that he does not treat clay simply as a material. His encounter with clay as a physical substance is more primal and fundamental.”

The artist considers his interaction with clay to be collaborative, instead of an imposition of his own will on the earthy material. Hoshino writes eloquently on his process for Ceramics: Art and Perception, explaining that;

“I engage in a dialogue with the clay as it sits in from of me, as a soft, flexible lump of matter. This dialogue is carried out through a form of body language: the primitive action of pressing parts of my body (my fingers) against the body of the clay… This is not a relationship in which I am active and the clay is passive, even if I am the first to speak…The dialogue can only take place if I empathise with the material, adjusting myself to the time contained in the clay and the rhythms of nature.”

Satoru Hoshino has been awarded several prizes in his native country, and has lectured and demonstrated in workshops throughout the world. His work is represented in the collections of numerous museums, including The National Museum of Modern Art, Kyoto, the Musée Ariana, Geneva, the Victoria and Albert Museum, London, and the Minneapolis Institute of Arts, Minnesota.