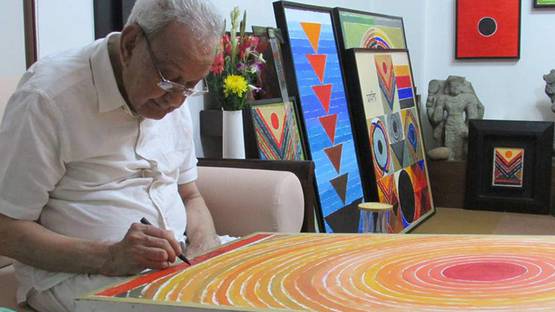 Sayed Haider Raza, born in 1922 in Babaria, is considered one of the most prominent Indian painters of his generation. He studied art from an early age, before moving to France in 1950 to study at the École Nationale Supérieure des Beaux-Arts in Paris. After studying in Paris, Raza continued to travel throughout Europe, exhibiting his work.

He was a co-founder of the revolutionary Bombay Progressive Artists’ Group (PAG), along with Indian artists Krishna Hawlaji Ara and Francis Newton Souza. This movement sought to turn away from the influences of European Realism, which dominated much of the academic art of India, and embrace Antar gyan, a uniquly-Indian inner vision. His early works include landscapes, and later moved towards abstraction as he became increasingly influenced by Modernist principles. 1970 was a turning point in Raza’s career, when he developed the concept of Bindu (a personal rebirth) in his art. The works from this period are more intricately linked to Indian roots and cultural themes, and were influenced by his trips back to India.

Raza is a founder of the Raza Foundation in India, which gives away the Annual Raza Foundation Award to emerging artists. In 2010, Christie’s sold his work Saurashtra for US$3.4 million, a record-breaking price for a living Indian artist. His work has been exhibited at the National Gallery of Modern Art in New Delhi, and is part of many international collections. He is a recipient of many awards including Prix de la Critique, Paris, 1956, the Rajkeeya Samman and Kalidas Samman, Government of Madhya Pradesh, in 1978 and 1997, and Officier de LOrdre Des Arts et des Lettres, Government of France, 2002. The Government of India conferred him with the Padma Shri in 1981 and the Padma Bhushan in 2007. He was also honoured with the Fellowship of the Lalit Kala Akademi in 1983.

After sixty years of living in France, Raza returned to India in December 2010 and now lives and works in New Delhi.